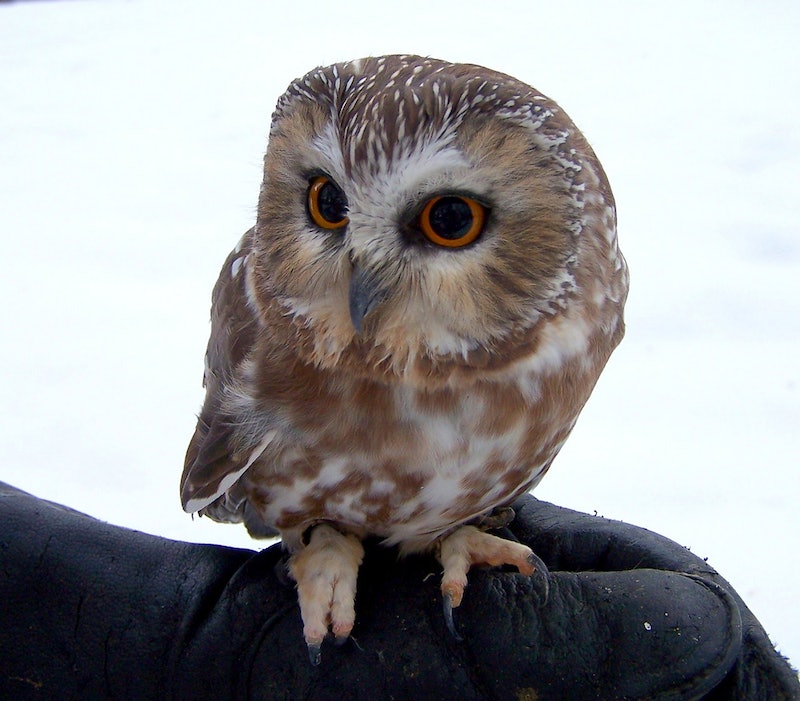 Who says that animal cafes have to be limited to common household pets? Owl cafes are the latest craze to sweep the globe — and if we're really, really lucky, they'll keep migrating until they finally wind up in the U.S. The latest one, Annie the Owl's pop-up bar, will be taking up residence in London between March 19 and March 25… and you guys? You have no idea how badly I wish I were over there right now. I dig most animals, but I really dig owls — and, unlike my cat situation (one of mine is snoring on the couch next to me right now again), I don't often have the opportunity to see them up close and personal.

As has been the case with most of the other animal cafes we've seen lately, owl cafes originated in Japan. Given the date of this Kotaku article about them, they've been around at least since late 2012/early 2013; how the gimmick actually works varies from cafe to cafe, though, so the experience of attending one will likely never be the same twice. According Brian Ashcroft at Kotaku, some of them do allow you to touch or hold the birds — but others have much stricter rules. Some of them serve owl-themed snacks, which look as adorable as they are delicious.

Annie the Owl, however, will be a little bit different. For one, it's not strictly a “cafe”; it's going to be more like a cocktail bar. Additionally, like the Purina One pop-up cat cafe that hit New York last spring, Annie the Owl is a charity event. No, you won't be able to adopt the owls — but your attendance will help fund The Barn Owl Centre, an organization which works towards the conservation of birds and wildlife in the UK. There will be at least five owls present for the week-long pop-up (Ruby, Cinders, Winston, Harry Potter Hedwig lookalike Darwin, and Annie herself); furthermore, wrote the folks who are organizing the event to BuzzFeed, “all owls are trained to be around [the] public and they will be accompanied by professional falconers.” Oh, and in case you're worried that the cafe will interfere with the birds' normal sleep schedule, they've taken care of that, too: The Annie the Owl cafe will only be open from 8 PM to 2 AM in order to keep with the owls' nocturnal nature.

Tickets will be 20 GBP, or just shy of $31; however, due to the projected popularity of the event, the opportunity to actually purchase those tickets is being doled out by lottery. As of this writing, over 6,200 hopefuls have already entered, so hurry up if you want a crack at it. The 20 pounds you'll shell out if you win includes two drinks, as well as a two-hour session with the birds. And as for where the event will be taking place? Alas, I can't tell you that yet; the venue will be announced only to the winners of the ticket lottery after March 16. All we know right now is that it'll be somewhere in Soho.

Anyone across the pond want to enter the lottery? If you do, and you win, do report back — I want to know all the details. Every. Single. One. Because how can you not love... well, this?

Just for the record, I'm still not actually over dog and cat cafes; I just love that we now get to add owl cafes to the list. The more, the merrier, right? Head on over to Annie the Owl's home on the web for details.

More like this
How To See The Lunar Eclipse On May 15-16, 2022
By Kaitlyn Wylde
The 10 Best Cat Puzzle Feeders
By Lauren Moison
My Picky Eater Dog Absolutely Devours This All-Natural Food
By Allison Berry
If You Have Pets, You Probably Don't Realize You're Making These Common Mistakes
By Mackenzie Edwards
Get Even More From Bustle — Sign Up For The Newsletter