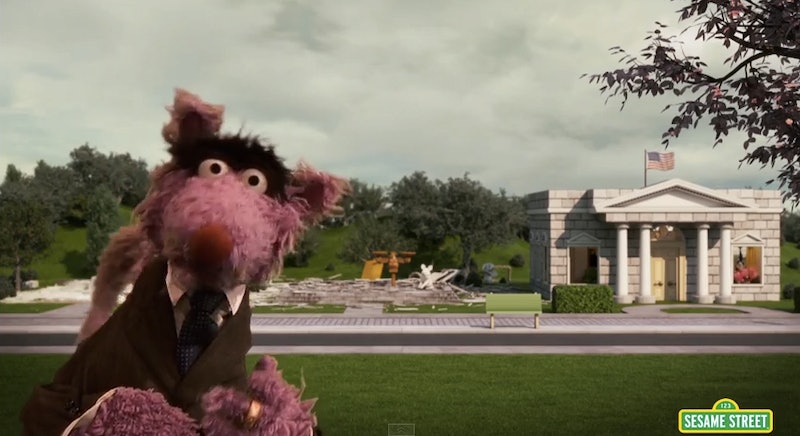 If you're a House of Cards fan who doesn't think they can wait until the third season is released this Friday, Feb. 27, you're not alone. Something about the way all 13 episodes are dropped onto Netflix all at once makes it feel like a really long amount of time goes by between the seasons; much longer than with other shows. It might have something to do with the fact that I drop everything and binge-watch every single episode within a 24-hour period, but I prefer not to examine that too closely. The third season is coming our way in mere days — but that's a long time to wait — so you may be getting antsy. And if so, what better way to bide your time than with this Sesame Street parody, showing us the Muppet-y parodies of Frank Underwood and all his cronies? Answer: trick question, there is no better way.

In this delightful reimagining, we meet Frank Underwolf, who's voiced by someone doing an impressive imitation of Kevin Spacey, and who has set his sights not on the House of Straw or the House of Sticks, but the House of Bricks. Or as he calls it, The White Brick House. Get it? That's the one he'd really like to move into. In the meantime, the other two are just in his way, so he proceeds to go show their owners "how the wind blows", if you know what I mean.

Now, I don't want to spoil the ending for you, because it's different from the show, and clever enough that you need to watch it yourself. So why don't you do that, and we'll reconvene in a few minutes over some of Freddy's ribs. (Sorry, pigs.)

I just love it! All the adorable references, like having Frank knock on the desk and the text messages show up onscreen? Such a great touch. Kinda makes me wish the real version was this adorable, so I could stop worrying about the characters I love getting killed off.