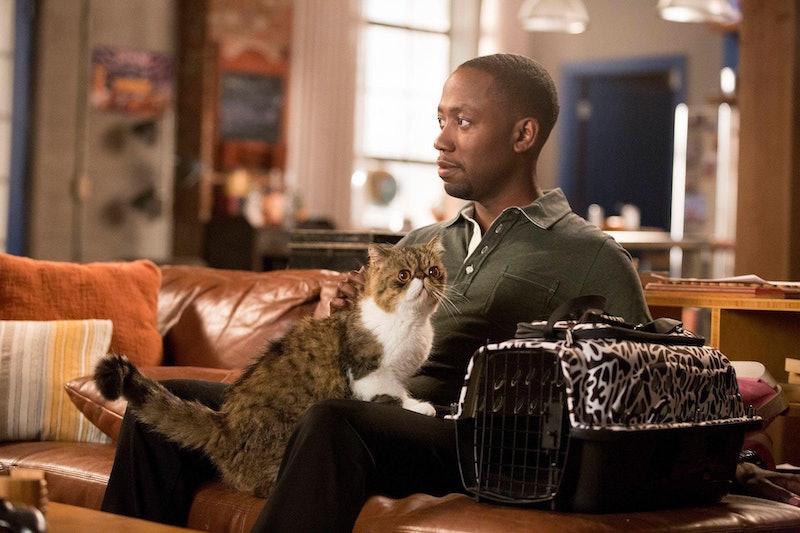 The New Girl cast is an ensemble cast in a "the whole is greater than the sum of its parts," kind of way. The core group — Jess, Cece, Schmidt, Winston, Coach, and Nick — are all crucial parts to the storyline of the show. Another player in the New Girl ensemble is Ferguson, Winston's cat who has been MIA for God knows how long. Ferguson, wherefore art thou? Even though Ferguson erred toward a more silent scene partner, he had a great screen presence that is missed dearly by New Girl fans. So what happened to Ferguson Bishop?

On the New Girl episode titled "Oregon," fans were given a little hint to where Ferguson has been hiding, although it didn't leave much hope as to his actual whereabouts or when we'll see him. Cece, who was threatening Winston if he revealed she loves Schmidt (how do characters not know?) said she would kill Winston and use Ferguson to wipe up his blood. Out of context it sounds horribly graphic, but I swear it was funny. Winston replied, "Good luck finding my cat — you know I haven’t seen him in weeks."

So Winston hasn't seen Ferguson in weeks, and fans haven't seen him in, like a season? Where could this little fur ball be hiding?

Show creator, Liz Meriwether, took a stab at easing the painful questioning of fans when she suggested that Ferguson was just nocturnal and doesn't like to be around people talking, which would explain a lot. Unfortunately, I'M NOT FALLING FOR IT. Maybe if you said he was just shy, I'd buy it, but no way this cat just doesn't like living with the best roommates to ever exist.

Winston Got Too Clingy

As evident by one of the best scenes in the entire series, Winston tends to be a little dependent on both Fergie Ferg and his roomies, so maybe Ferguson was like "Funk this" and got the hell out of dodge.

Ferguson Got Lost Under Nick's Socks

I just feel like it is very possible that Nick has an ever growing pile of socks in his room and Ferguson might be taking cover underneath it. Suggesting they look there, where no person has ever looked before.

In which Ferguson responds to all of this intrusive inquisition over his whereabouts with Kim K.'s best quote, "Can I live?" Yes, Ferguson. You can live. Congrats on the maybe love.