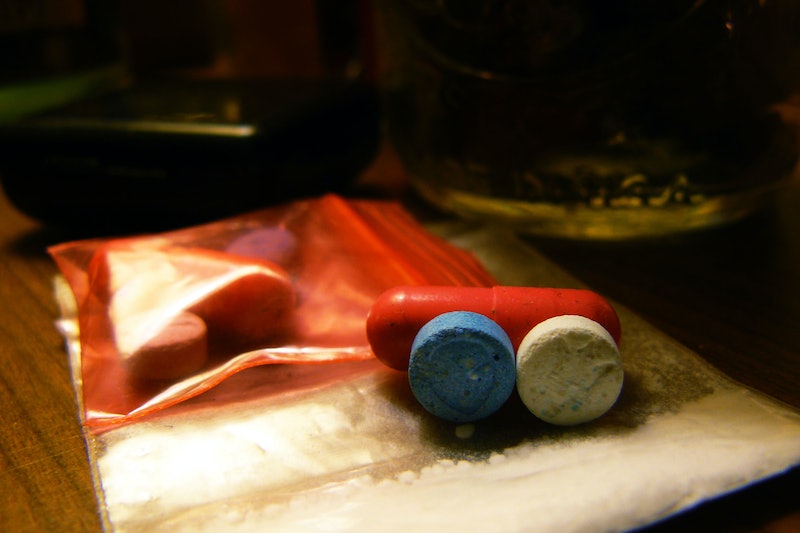 Ecstasy, Molly, or X — whatever you want to call it — seems to have cycled back around into popularity. The landmark of Molly's popularity probably came when Miley Cyrus sang about it in "We Can't Stop," which everyone in the world heard at least three times per mall visit in 2013. Since 2012, ecstasy use has been on the rise. Over the weekend, 12 Wesleyan students are in the hospital from a bad batch, showing how steadily the drug has been gaining popularity, as well as news coverage.

After a slew of overdoses at concerts during the summer of 2013, colleges and universities across the Northeast warned students about the dangers of taking ecstasy. In the wake of three college students' highly publicized fatal overdoses and the sickening of five more students at concerts, the Drug Enforcement Agency warned the young and easily influenced that "there's no 'good batch' of Molly." But people don't always bother to ask about how "pure" the drug is before taking it.

In its most recent resurgence into the cultural consciousness, the name "Molly" has rebranded ecstasy as a new type of drug. With a more approachable name, the club drug is now seen as a more natural and harmless version of ecstasy — but it just isn't so. According to The New York Times, the Drug Abuse Warning Network reported that the number of MDMA-related emergency room visits doubled from 2004 to 2013. And U.S. Customs reports that there were 2,670 MDMA confiscations in 2012, up from 186 in 2008. That's a more than 14-fold increase.

And a number of colleges across the country are reporting increased amounts of Molly use on campus. In 2014, the University of Illinois newspaper The Daily Illini reported that the university had seen a spike in ecstasy-related drug charges — nine in the 2013-14 school year alone. In January, The Boston Globe reported that emergency workers in Boston have seen a 33 percent increase in narcotic-related incidents from 2013 to 2014. Just last week, a student at Purdue University was charged with nine counts of possessing and dealing MDMA.

According to the Substance Abuse and Mental Health Services Administration, ecstasy is only the fourth most popular drug among young adults, falling behind only marijuana and non-medical use of painkillers and tranquilizers. Reported ecstasy use in people ages 19 to 28 peaked in 2001, dropped until 2007, and has been rising since then — though the numbers about leveled off from 2012-2013.

What's the danger of this increase? Why shouldn't college students take ecstasy, or its "purer" form, Molly, which often doesn't really contain any MDMA, the active ingredient?

There is a long list of reasons why you shouldn't try ecstasy, guys. Some people take it tons of times and don't experience any serious health consequences, but some people try it once and die. It can make you severely dehydrated, cause your brain to swell and give you a seizure, constrict your blood vessels and give you a stroke or heart attack, or cause brain damage.

This isn't just a Scared Straight-type PSA. Ecstasy is one drug whose popularity is having destructive effects on young people. In this case, listen to what your sixth grade teacher told you in D.A.R.E. — hugs, not drugs.