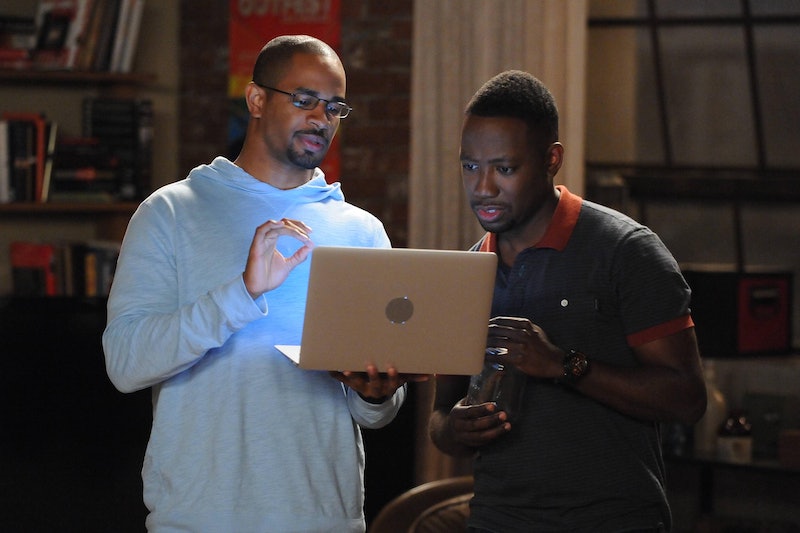 Season 4 of New Girl has been a totally mixed bag, but for all fans, the news that the show was going to be writing off Coach was just another huge disappointment. But when will Coach actually leave New Girl ? We kind of need to prepare ourselves, writers. There are only a few more episodes left in Season 4, and those will be the last six episodes with Coach as a main cast member of New Girl. So the Season 4 finale will be Damon Wayans, Jr.'s last ever appearance as a main cast member; he's saying goodbye to the show for the second time. In a way, one of the best things that ever happened to the show was Wayans leaving after the pilot to be on Happy Endings. We got more Happy Endings, for one, and we also got the addition of Lamorne Morris as Winston, who's the best joke delivery system on TV when he's well written (and he's been pretty much the only reliable parts of Season 3 and 4).

There's no guarantee that Wayans, Jr. will never appear again. He's "leaving" the show because he's chosen not to renew his series regular contract, but showrunner Liz Meriwether has promised that they're simply writing him off, not recasting or killing the character or sending him into space. But we can't rely on having Coach there in every episode, making things like CeCe's attempt to go to college or dispensing dating advice to Schmidt go from "totally uninspired" to "at least a little interesting."

I know we'll miss everything about Coach and about having Damon Wayans, Jr. on the show, but out of all those reasons, here are the top five reasons that no other series regular can replace Coach, in our hearts and in our minds.

Brad from Happy Endings was Wayans' breakout role, and for good reason — he managed to kick off and be the only successful example of the "Laid Back Husband to a Type A, Aggressive Wife" trope. And every bit as much as Brad loved a good cashmere sweater and bubble bath, Coach loves beer and being left alone to ignore his feelings. It's not always totally convincing to see Wayans forcing the gruffness and the toughness, but already he's proven that he won't just play Brad over and over again.

Unfortunately, Jake Johnson and Wayans attempted to make their own movie this summer, Let's Be Cops , that bombed horribly. I guess it's not just the actors getting along — it's their New Girl characters.

3. He Gives Us a Reason to Visit Jess' Workplace

Jess has a bad habit of having... terrible work stories. From school field trips that go nowhere to cliques of mean teachers, these plotlines are pretty much only worthwhile if the show adds one of the main cast, like when all the guys show up to chaperone the dance. But it's also nice to see Jess being a confident boss lady, so having Coach as a buffer so Jess' vice principal misadventures aren't stranded in the middle of nowhere was a nice luxury.

4. He Proves That All Black Characters Are Not Alike

No matter how thirsty Winston gets to have a classic mess-around, you'd never mistake these two characters for one another. Winston is a sweet, absurd cat lover who's so emotionally open he once thought he had a period. Meanwhile, Coach would rather throw a medicine ball at his problems, do three squats, and chug a beer.

5. When He Was There, He Was the Voice of Reason

For a brief stretch of episodes, when it looked like New Girl was going to pull out of the downward tailspin created by the Nick/Jess thing, Schmidt moving out, all sorts of bad story decisions, Coach was the voice of reason who helped bring that along. That meant tabling some of Wayans' best comedic qualities, like his physicality, but Coach was able to call all these characters on their neuroses. Without him, everyone left will need a serious reality check.