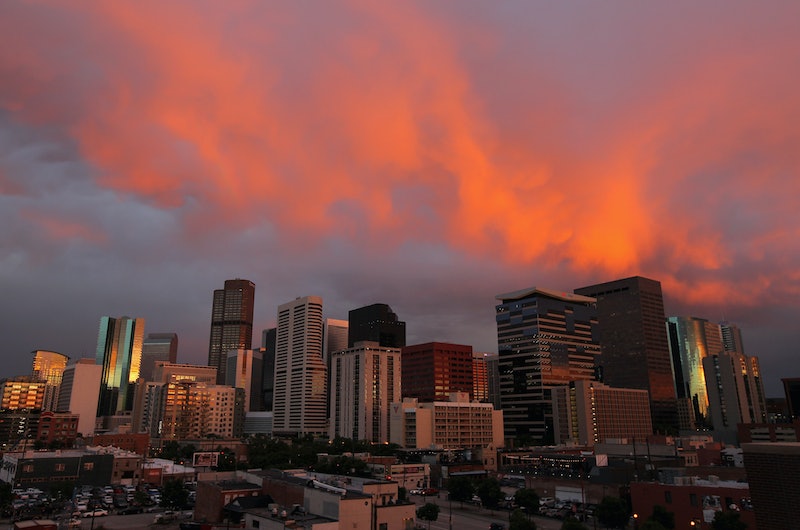 We learned during last winter's Polar Vortex that we often tip our food delivery people more when the weather sucks — but do some folks tip better than others? GrubHub did a little number-crunching recently to see how tipping behavior changes in the U.S. during the cold, snowy winter months, and the short version is: Yes. More specifically, the 10 cities seen here tip the most during the winter, simultaneously making the rest of us look bad and giving us something to aspire to. Ready to get schooled? Because most of us seemingly have a lot to learn.

When it comes to delivery service, you don't generally need to tip 20 percent the way you would for table service — but you do still need to tip. The Emily Post Institute recommends tipping your delivery person 10 to 15 percent of the bill, or between two and five bucks for a pizza; if your delivery person goes above and beyond in some way, shape, or form, though a little extra wouldn't be amiss — and fighting through a blizzard to get your pad thai to you definitely falls under “going above and beyond.” I know it's their job, but seriously. Whether or not you even should order takeout during a storm is an ethical debate that kicks up every time we have one — but if you're going to do it, the least you can do is give a couple extra bucks to the person who might literally have risk life and limb bringing you your dinner.

According to GrubHub's data, though, these 10 cities pass the “tipping during nightmarish winter weather” test with flying colors. They all tip a substantial portion above the national average, in some cases even going over the 15 percent suggested by the Emily Post Institute. Are you a delivery person working in one of these cities? Congrats! You are delivering in the best places possible! Are you not a delivery person and not living in one of these cities? Buck up, everyone — we've got some work to do if we're going to catch up to these fabulous do-gooders.

Denver tips 15.7 percent of the total delivery price during winter, putting it a whopping 12 percent over the national average. Denver? Your delivery people thank you for your kindness and sense of responsibility.

Dallas also tips handsomely, clocking in 15.1 percent of the total delivery price when the weather bites. Everything is bigger in Texas, right?

But let's not forget Kalamzoo, which technically tied with Charlottesville: This Michigan city also tips 15 percent during the winter season, seven percent above the national average.

So, for that matter, do Arlington…

...And Columbus. According to GrubHub's data, they all weighed in at 15 percent of the delivery total.

Number is eight is when we start to dip below 15 percent, but Alexandria still gets props for tipping 14.8 percent of the total delivery price during winter — that's still five percent above the national average.

And lastly, Baltimore also tips 14.8 percent when the weather blows. Let's have a round of applause for everyone!