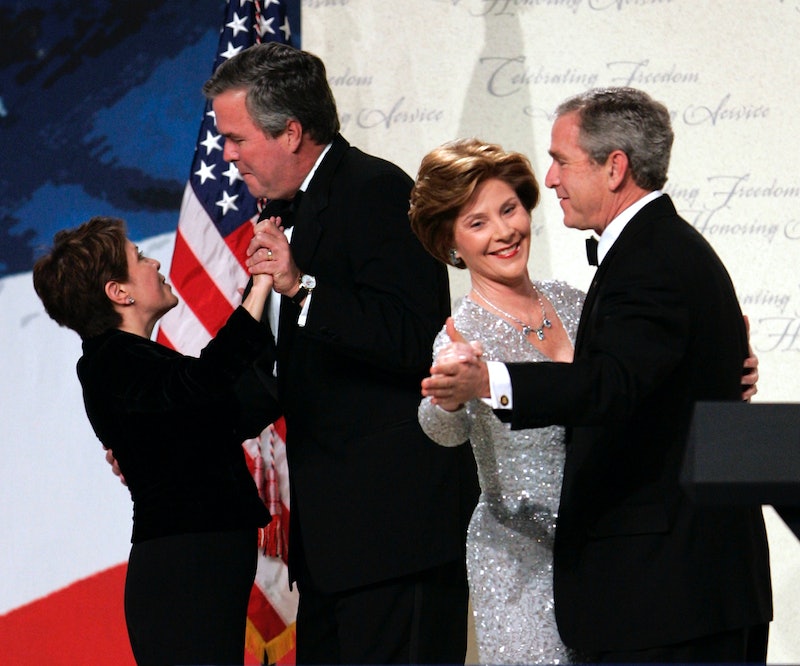 "Seasons of Love" is not just a song, my friends. It's a way of life — at least for the Bush family. The Bushes are no strangers to romantic gestures, and Jeb Bush just proved his expertise in the art of love and the ways of social media in one fell swoop. Bush posted a photo of himself and his wife, Columba, from their wedding to celebrate their 41st wedding anniversary on Monday. But he won't be posting any more — that was the only one.

You might not expect that the Bushes would be Frank Zappa fans, but apparently at least one of them — the lesser-known Marvin — is a Zappa lover. According to Jeb's Facebook post, Marvin taped over Jeb and Columba's wedding video tape with footage from a concert. But despite this loss, Jeb made the most of the photo he did have by sharing it with the rest of us. He's not the first Bush to play Cupid. As it turns out, not one but two George Bushes have been caught on kiss cams at football stadiums during Houston Texans games, and both former presidents delivered kisses to their (respective) ladies that were respectable and cute, if not steamy. Here are the top four romantic Bush moments.

This is the only photo from the couple's wedding. You can't even tell it's from 1974!

Right before Thanksgiving in November 2014, the elder Bushes gave thanks for each other at a home state game.

The legacy carries on (even though technically, this was taken a year before Bush's dad was caught on the kiss cam). Like father, like son — these videos are nearly identical.

Not to be confused with Laura Bush, Lauren Bush married David Lauren — son of Ralph Lauren — in what was apparently a beautiful ceremony in 2011. She did choose to take his name and is now known as Lauren Bush Lauren. She is the daughter of Neil Bush and the niece of George W.