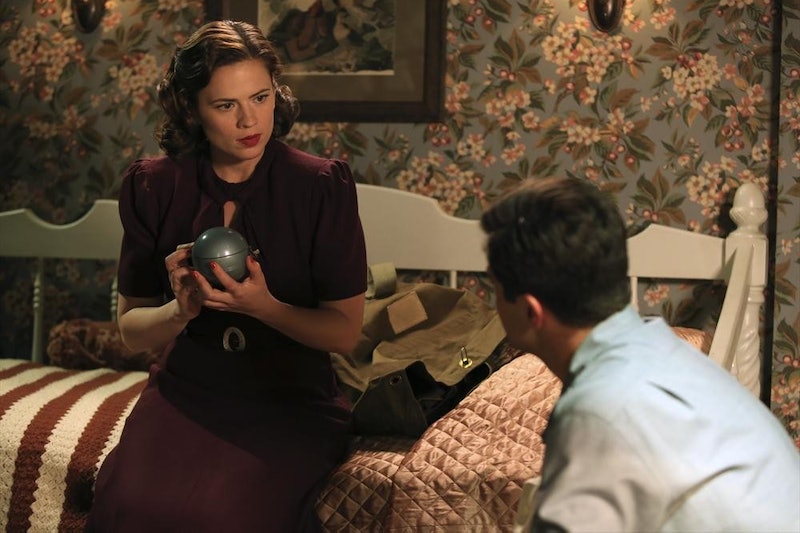 Agent Carter's season finale is upon us. When it airs on Feb. 24, all of the loose ends have to be wrapped up. (After all, we don't know if the limited series is getting a second season yet.) There are many questions still outstanding on the show, but one for me burns harder than the rest: What's the deal with Captain America's blood on Agent Carter ? A lot of people have gotten into a whole mess of trouble to protect that little vial of fluid. Peggy Carter defaced the hallowed walls of The Griffith to protect it. Stark tried to convince Carter it was a super weapon, the Blitzkrieg Button, to hide the vial and its contents from her. It all has to be of some significance, right?

Before we get into some theories, let's recap the trail of blood. Carter was able to retrieve the vial for Stark before she knew its true contents. When Stark finally admitted that it was a sample of Captain America's blood, she refused to turn it over to him, and hid it in a hole in the wall of her room. But when Carter was seized by the SSR under suspicion of espionage, she had the vial with her, and it was confiscated. To gain the trust of her former colleagues, Carter admitted to the SSR what the vial's true contents are. Now, it's with the rest of Stark's goodies, in the SSR's science lab.

So, where does the blood go from here? I have a couple of guesses.

It Helps Create The Winter Soldier

We know a few things from watching Captain America: The WInter Soldier. We know Stark doesn't get to mass-produce and profit off of the Captain America serum. In the future (meaning today), there's only one other super-soldier that's been revealed so far: The Winter Soldier, aka Bucky Barnes. Will the sample of blood from Agent Carter lead to the creation of The Winter Soldier? Agent Carter has been far more concerned with Leviathan than Hydra, but, as we've seen on Agents of S.H.I.E.L.D., Hydra can be a pretty insidious organization. Maybe Leviathan was a red herring all along.

Stark Gets The Blood Back

Stark insisted that he was interested in the blood for science, not for profit. The Agent Carter version of Howard Stark doesn't inspire much trust — he's basically done nothing but lie to and manipulate Peggy. But what if he's telling the truth? If Stark somehow clears his own name, if Leviathan gets defeated, and if Carter gets some measure of control over at the SSR, she might be able to return the blood to Stark for altrusitic, scientific purposes, like fighting diseases and stuff (since we know he doesn't make an army of super-soldiers).

Maybe It's Just A Creepy Keepsake After All

Leviathan had the chance to steal the blood, and didn't. Nobody seemed to be all that concerned that the blood was missing when it was holed up inside Carter's wall. Maybe it isn't that important after all. Now that Carter has traded it for her colleagues' trust, its purpose could be over. It could rot away in the SSR evidence locker for eternity, like the Ark of the Convenant from Raiders of the Lost Ark. Or maybe Carter could take it back: Wearing a vial of blood as a keepsake worked for Billy Bob Thornton and Angelina Jolie way back when.