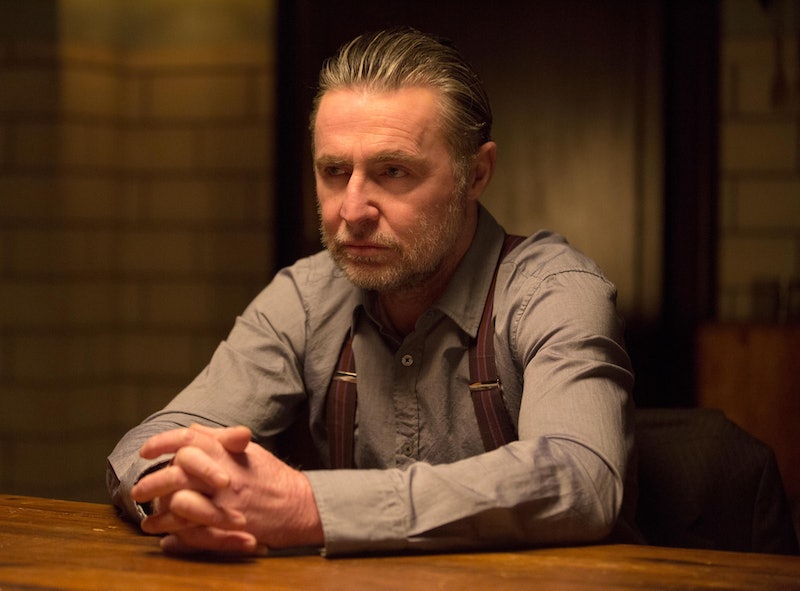 Wow, Gotham actually got pretty dark in this episode, and they did it in the cheapest way possible — by putting fan-favorite characters in jeopardy. When Reggie stabbed Alfred, leaving him in a serious, potentially fatal coma, my first thought was, "I sure hope Sean Pertwee is a series regular, because if they kill him off in Season 1, Gotham isn't playing fair!" And my second thought was, "Is Wayne Enterprises going to kill Bruce?" Sure seemed like it, given that somber meeting with Reggie that went down at the end of the episode. They basically thanked him for stabbing his old pal, then said they'd take over from here. Look out, Bruce!

And who's that shadowy figure at the head of the board room table? He's got a shock of bright white hair, and wasn't ethically opposed to killing a twelve year-old boy... can't be someone good. His morals resemble those of Batman villain Great White Shark, though Shark's name isn't based on his hair color (it's his personality... and an unfortunate mutation that leaves him looking sharklike). This whole episode was filled with Joker teases and red herrings. But the real villains in this episode was, secretly, big business like Wayne Enterprises.

And all that playing around had nothing to do with the big emotional cliffhanger of Alfred's mortality. That means that poor Bruce is not just in danger of losing another father figure, but that he's also very vulnerable right now, since Alfred is pretty much his only family and the only adult he can trust (besides Jim Gordon). Get thee to Barbara Kean's apartment immediately!

Personally, I'm hoping Reggie has a change of heart and helps Bruce out. For most of the episode, I was waiting for Reggie to reveal that he was bitter towards Alfred for selling out and becoming a butler rather than a soldier. But in retrospect, it seems like he was actually trying to antagonize the guy in order to get thrown out, so he wouldn't have to go through with killing his friend. If only Alfred wasn't such an upstanding gentleman, he'd be fine! Oh, cruel Gotham. I know you can't kill Alfred, (he's Alfred! He never dies) but you sure are intent at wrenching my heart out in the meantime.