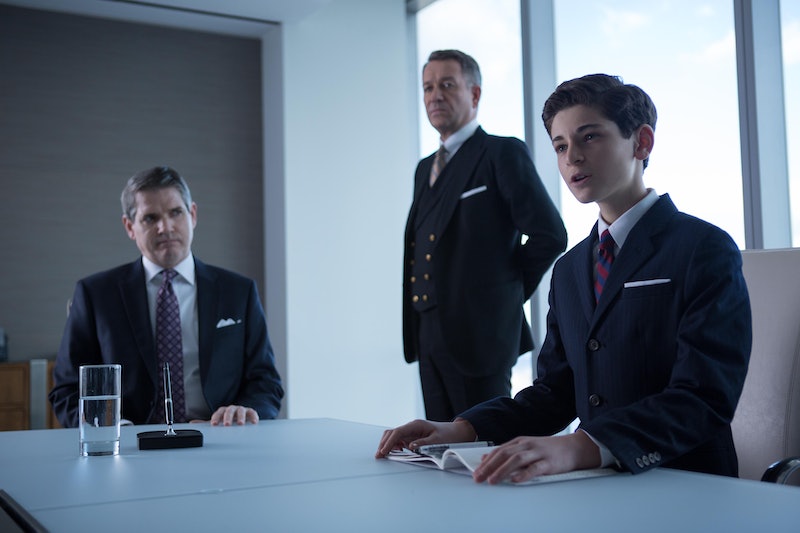 While most of Gotham's big circus episode was focused on the introduction of Dick Grayson's parents and a potentially matricidal Joker, there was also a smaller plot in which the young Bruce Wayne took over Wayne Enterprises, his parents' company, after worrying that it had perhaps fallen into corrupt hands. He's been worried about the safety of the company since earlier episodes of the series, when Stan Potolsky was distributing a super drug called Viper to Gotham City's street population that gave them temporary superpowers, but then caused their bones to rapidly grow brittle and shatter. Gordon and Bullock managed to catch the street level dealer, but not track it all the way back to Wayne Enterprises. However Bruce discovered the company's involvement in a key scene, and ever since, he's been plotting how he's going to take Wayne Enterprises back.

Sharon Washington's Miss Mathis is returning for the next episode, "Red Hood," which suggests that we'll be hearing about this plotline again after a long wait. And something tells me that she won't be super excited about hearing Bruce is taking a deep look at Wayne Enterprises' inner workings. She did say back then that she was nothing more than "middle management," but it seems like she's actually going to have much more influence than that description suggests, because she was the one who authorized the destruction of that super drug. Here's a reminder of how those scenes went down:

Even though those clips teased that the board was going to be fulll of hard hitting businessmen, it's not all that bad for Bruce so far — that board meeting pretty much folded immediately and agreed that a 12 year-old boy could run the company because his parents used to own it. And they basically admitted that they were doing some majorly illegal stuff, without going into detail (silence sometimes speaks louder than words). But even though it seemed like he scared them straight, this is Gotham City, and you can never count on a verbal promise and a handshake. I'm sure as soon as Bruce exited the building, Falcone walked inside and bribed the whole place. Because remember way back when there was a thinly veiled reference to the Waynes leaving their company in Falcone's "territory" and perhaps control? That was in the "Arkham" episode, just around the same time as "Viper."

However Gotham chooses to continue this story, Wayne Enterprises is an important indicator in the health of the city. Since it's a company worth billions that basically runs the entire city via a combination of infrastructure and charity, when Wayne Enterprises is in trouble, the whole city is in trouble. And since Gotham has promised that the titular city is on the brink of total destruction that will come around once these villains grow up, one of the ways it can demonstrate that is by the continuing corruption at Wayne Enterprises.