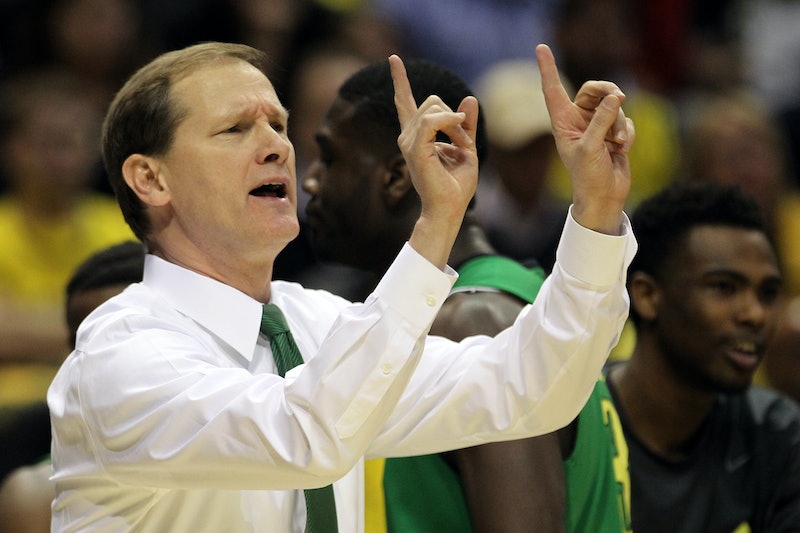 Here's a lesson on how not to handle campus sexual assault cases. Earlier this month, the University of Oregon and the men’s basketball coach, Dana Altman, filed a counter lawsuit against a sexual assault survivor, claiming that her lawsuit would discourage other survivors from coming forward. They’re asking that the student, going by Jane Doe, or her attorney, pay for their attorney and court fees caused by her lawsuit.

In March 2014, Jane Doe accused Brandon Austin, Damyean Dotson, and Dominic Artis, of gang raping her, the lawsuit says. According to The Oregonian, the Lane County District Attorney charged none of the accused basketball players, but all three were found to have engaged in "sexual misconduct without explicit consent" by the school's director of student conduct. They were kicked out of school and banned from campus. In the original lawsuit filed against the University of Oregon and Altman, Jane Doe claims that Altman continued to recruit Austin, one her alleged assailants, despite knowing that Austin was involved in another sexual assault case at his previous school, Providence College.

Jane Doe’s lawsuit included a statement from Austin’s mother, claiming that the University of Oregon was aware of Austin’s suspension from the basketball team at Providence College. In the counter lawsuit, Oregon claims that they had no prior knowledge of this.

Jane Doe also claims that the university violated state and federal privacy laws by accessing her therapy records without her permission in anticipation of her pressing charges. According to Eugene newspaper The Register-Guard, Jennifer Morlok, a therapist at the University of Oregon, also claims she was told to provide the female student with "nonstandard care," though she didn’t disclose which student she was discussing. The newspaper reports Morlok said the request "went against my ethical and professional standards."

According to the counter lawsuit filed by the University of Oregon, they claim to have obtained Jane Doe’s counseling records legally, because they are relevant to the lawsuit. The university's attorneys said:

The entire reasoning behind the counter lawsuit is completely off. The idea that Jane Doe's lawsuit, which aims to correct how the school has mishandled her case, would discourage other rape survivors from coming forward just doesn’t make sense. In fact, a petition's been started in order to let the University of Oregon know that they're completely in the wrong for suing a sexual assault survivor. Colby Bruno, the senior legal counsel at the Victim Rights Law Center, spoke to The Huffington Post about how she also doesn’t agree with Oregon’s counter lawsuit. Bruno had this to say about the lawsuit that Jane Doe filed:

These types of lawsuits help bring voices to some victims who feel wronged, but were not in a place to speak out about it. These lawsuits often help with reporting, and do nothing to discourage reporting.

You know what will discourage survivors from coming forward and pressing charges against their rapists? The possibility that their university might sue them. The University of Oregon is setting a terrible example of how to handle a sexual assault case.