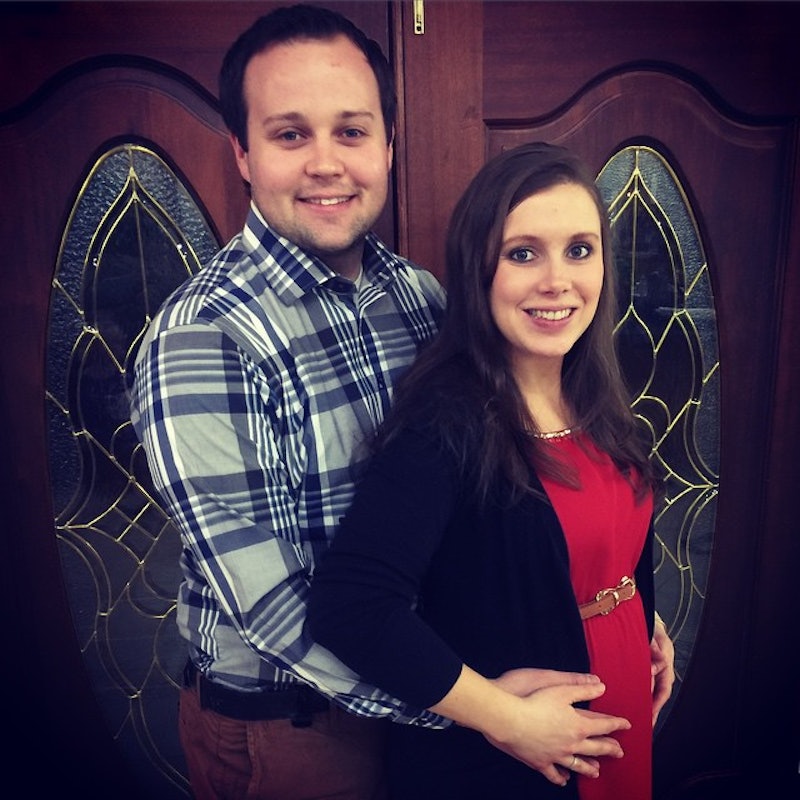 19 Kids and Counting has been all about the weddings lately. First, it was Jill Duggar's engagement and wedding to Derick Dillard, and in last season's finale, Jessa got engaged to Ben Seewald. This season, we get to see Jill's pregnancy and Jessa's wedding, and there's been so much hype surrounding their nuptials that it's easy to forget they aren't the first of the Duggar clan to get married. That title belongs to oldest son Josh, who's officially been married to his wife, Anna, for almost seven years, and even though they now live in Washington, D.C., they still occasionally make appearances in the Duggars' home base of Tontitown, Ark. So what have Josh and Anna Duggar been up to since we last saw them? If their social media accounts have been any indication, they've been very busy.

And yes, before you ask: Josh is still touting "family values" in DC as he lobbies against abortion and all kinds of things that interfere with women's rights. It gives me a headache just looking at all of the propaganda he posts on Instagram, but somehow, I was able to comb through all of the T-shirts about striking down Roe vs. Wade to find something much less infuriating: Adorable pictures of their children.

And speaking of children...

Josh & Anna Are Expecting A Baby

Remember when Anna told Jill she was jealous of her pregnancy in the premiere? Yup, she was apparently so jealous that she decided it was time for a fourth child, and thus the pregnancy announcement rolled in circa December 2014. She's due a few months after Jill, but their babies will be pretty close in age, so it'll be interesting to see if they're buds. I'm also looking forward to what "M" name Josh and Anna will choose for this one.

Unfortunately, Josh Is Still Infringing On A Woman's Right To Choose

At least we don't have to watch any of this on 19 Kids and Counting.

They're Still Kissing With Their Eyes Open

Come on, guys. I know you're trying to make sure the picture actually worked, but this is upsetting to me. All jokes aside, I'm glad that their marriage is working. They do seem like they love each other tons, and they obviously take really good care of their kids.

Their Kids Are As Adorable As Ever

Now, what really matters: Mackynzie, Michael, and Marcus. Yes, they are precious, and yes, I would watch an entire show dedicated to them with the promise that their parents would never show their faces on TLC again.