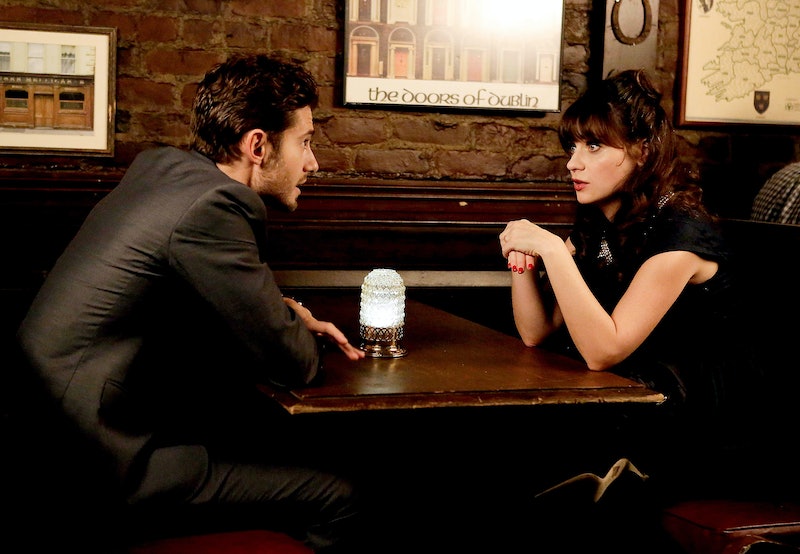 I can't believe I'm saying this, as someone who has held a torch for Nick and Jess on New Girl from the very beginning, but I'm kind of devastated that Jess and Ryan have officially broken up. On last week's episode, the distance between California and the UK proved to be too much for the couple, and they ultimately decided to call it quits the weekend of Jess' father's wedding. When distance is an issue, there are two possible solutions: Someone needs to move to be near the other person, or the relationship needs to end. And as much as I would have loved to have seen them work it out because everything about Jess and Ryan has been adorable from the start, it just wasn't meant to be. In fact, I'm almost 100 percent sure New Girl is splitting up Jess and Ryan for good.

Where does my certainty come from? Well, I'd love to tell you that I've spent hours delving into the characterization of both of these fine fictional folks, but really, my answer came straight from my Twitter feed. The beautiful, beautiful Julian Morris — aka the actor who plays Ryan — supplied us with this little gem of knowledge a couple of weeks ago before the Valentine's Day bar crawl episode aired.

First of all, I saw this tweet well before the episode aired (in the eastern time zone, too!), so it would've been nice for Morris to issue a spoiler alert beforehand. But second of all, if it was really Morris' last episode, that doesn't bode well for Ryan's future with Jess, unless New Girl decides to bring him back in the future to put them back together again. But even though her relationship with Ryan ended in kind of a crappy way, I think it was necessary for Jess' character development. She proved to herself she could have another meaningful relationship post-Nick split while still keeping their friendship alive, and now that she knows it's possible, I'm sure her next guy will be even better, if not, unfortunately, less British.

The bright side? All of Jess' angry coworkers will be decidedly less angry now. So that's a good thing.

Besides, Jess is totally better off without him. If Ryan's going to dodge her calls and fail to tell her he won't be showing up to her father's wedding until the day before, their relationship wasn't as special as it originally seemed to be. And besides, Jess being a free woman again leaves the opportunity for a reunion with Nick wide open, right? Maybe? My fingers are crossed. I'm still pulling for those crazy kids!