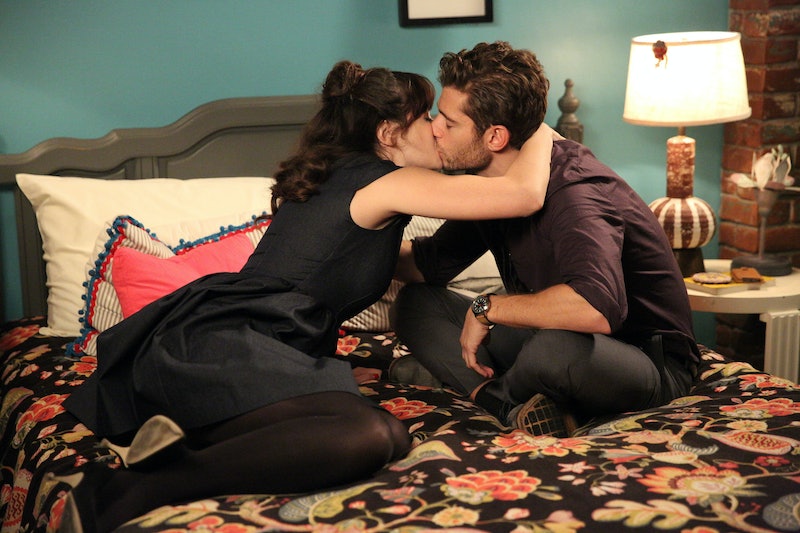 Not to sound like a broken record or anything, but I can not and will not ever give up on the idea of Nick and Jess getting back together. (When I 'ship, I 'ship hard, people.) And now that our beloved Mr. Miller is once again on the market, my determination for a rekindled romance between these two has grown all the more stronger. In fact, this inspired me to pay extra close attention to Jess and Ryan's relationship during New Girl 's Valentine's Day episode "The Crawl," which faced its fair share of struggles throughout the night.

Because, as it turns out, the school is now suddenly not OK with two of its coworkers having a relationship with each other, forcing Ryan to search for a new job at a different school. And since he was nervous about not seeing each other as much, Ryan suggested that Jess move in with him. And while Jess' response was less than ideal at first, she ends up saying yes. Problem is, Ryan gets a job offer as Headmaster of Wellington… which is in England (aka 5,000 miles away).

This type of situation does not bode well for any relationship, let alone one that's only a few months old. No offense, but they are not strong enough to be facing such an overwhelming obstacle. I mean, even they aren't sure their relationship can survive. Sure, given that this is Jess we're talking about she's trying to remain positive, but her asking "We can do this long distance, right?" doesn't exactly inspire much confidence. If anything, they're just trying to convince themselves as much as each other.

Look, it's not as if I don't like Ryan. On the contrary, I'm a sucker for adorable British accents. However, it seems like the writing is on the wall and it's only a matter of time until these two lovebirds decide to fly solo. And now that Nick is finally starting to show some initiative with his life, this could be just the opportunity fans need to see their favorite couple back together again.