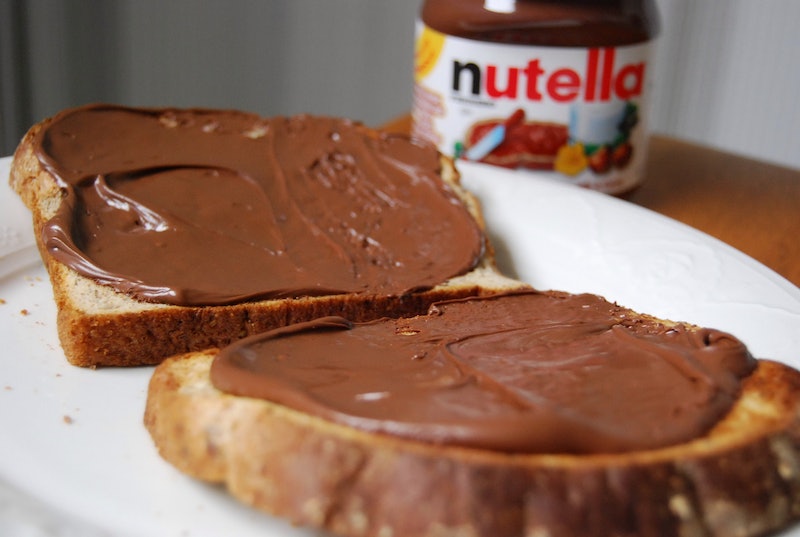 Like many people, I dig Nutella — but I don't think anyone digs it quite as much as this guy does. Wardere Farah, you see, loves it so much that he's been posting pictures of his relationship with Nutella on Instagram for all the world to see for well over a year. It's so beautiful, you guys. Seriously. I hope these two crazy kids make it, because they are just darling together.

OK, so to say that Farah is dating Nutella wouldn't be entirely accurate; his Instagram page is, however, totally devoted to the chocolate hazelnut spread. According to Cosmopolitan, the whole thing started in 2013 when Farah, who is based in Canada, snapped a selfie of himself holding a giant jar of Nutella. He thought the resulting photo was hilarious, so in 2014, he made a New Year's Resolution: Snap one shot of Nutella every day for an entire year. In spite of this tale, it's probably worth noting that jars of the sweet spread started appearing on Farah's Instagram page way back in 2012 (here's the very first one) — but 2013 is when the Nutella love really started kicking up, so do with that what you will.

In any event, what followed was a glorious love affair with one of the world's most perfect (if terrible for you) foods — and even though 2014 has long since drawn to a close, Farah has continued to spread the gospel of Saints Chocolate and Hazelnut. He told Cosmo that he eats roughly five pounds of the stuff a month; he budgets $50 for his habit per month, with a 13-ounce jar costing about six bucks.

“That's a lot of Nutella” would be putting it mildly.

So what exactly do Farah and his beloved dessert spread do? Pretty much all the things other couples do. They go on dates together:

They work out together:

They celebrate Valentine's Day together:

They enjoy fall foliage together:

They go on road trips together:

They sometimes put each other before their friends:

And they spend the winter holidays together:

I do have to wonder, though: Does the Nutella know it's being replaced several times a month? Do its memories transfer from jar to jar? Or is it like starting a whole new relationship with each new jar? Does the Nutella want to be eaten in the first place? Does it even know it's going to be eaten? I can't help but think that maybe the Nutella has gotten the short end of the stick here…

...But then again, maybe that's just me and my awful habit of anthropomorphizing every inanimate object I see. The whole project is hilarious, so I highly sugest heading over to Farah's Instagram page (@wardere) to see more. But beware: Doing so may cause extreme Nutella cravings. Consider yourselves warned.