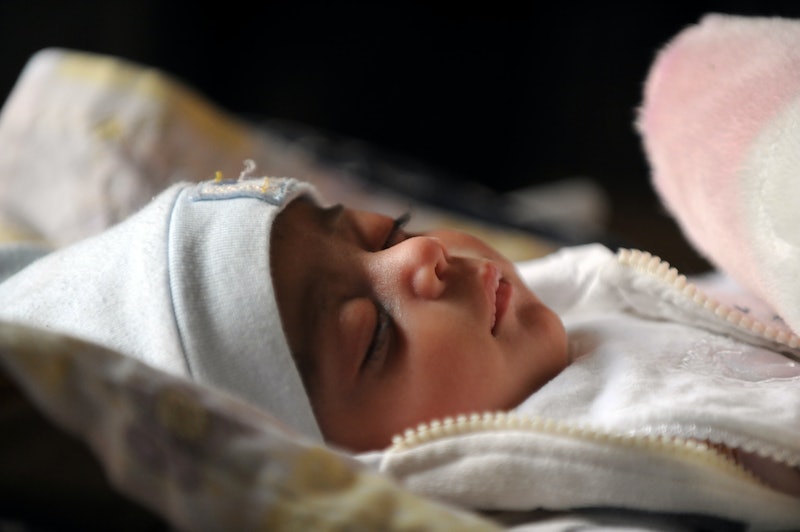 Our relationship with babies is weird. We are biologically wired to find these miniature humans incapable of sustaining and protecting themselves adorable, despite the fact that they are kinda gross. I'm always so amazed by the science that propels our compulsion to hold, nurture, feed, and generally keep alive these bizarre creatures until they can do so on their own. Even if we don't really know what we're doing when we embark on helping out others' with their own offspring, we try to fake it. So I never really bought it when people said babies creep them out. Like, okay, you can be scared of the responsibility associated with a baby, which is considerable whether it's your own or you're just in the same room with it for a few minutes—that really is a bit unnerving. But being afraid of actual babies? That's just silly, or so I thought—until now.

Here we have a Russian baby who is clearly developing a complex, malicious plot to usurp the happiness and well-being of the inhabitants of earth and commence a never-ending reign of terror. Just kidding—he's just a baby, guys! There's no way his brand new brain can map out such endeavors (probably, I hope). He's just having himself a casual laugh, likely over a basic sensory experience such as observing the family dog trot around. But take away the compelling video component and try experiencing only the audio. It's...stirring. Stirring in a way that makes me less keen on living alone during nighttime circumstances. After some careful, slightly terrified consideration, I gotta say: The most disturbing part of this video is the way in which the infant gasps for air and lets it rattle in his minuscule body before letting loose another long cackle. *soul-shaking chills forever*

Did you make it through at 39 seconds? If you have a uterus, how did it feel after watching this video? I'm just trying to make sense of this crazy world, you guys.