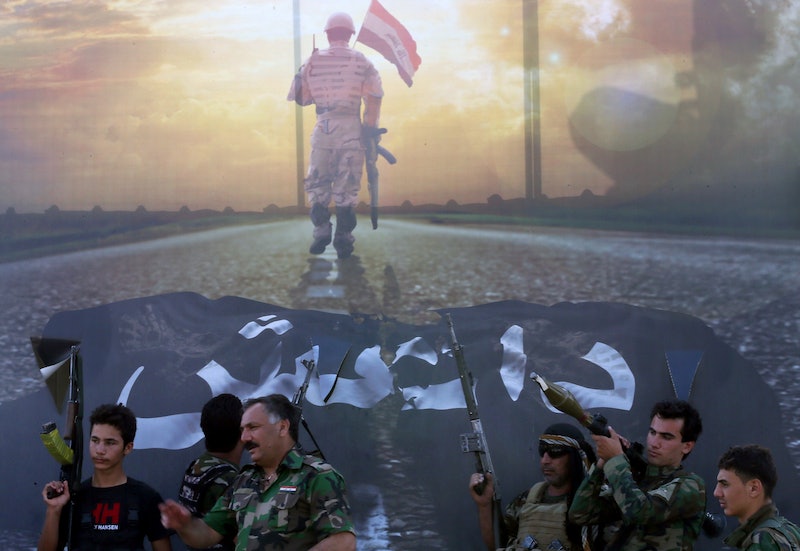 Seizing land was just the first step. In its effort to establish a so-called true caliphate, ISIS is now seizing culture as well. Over the weekend, ISIS bombed the Mosul Public Library and burned 8,000 books, many of which were rare titles and manuscripts. The Public Library is the latest target in a series of raids that have demolished libraries in Mosul and elsewhere in Iraq over the past few months. In addition to destroying literature or materials that don't comply with the group's interpretation of Islamic Sharia law, ISIS has also been burning religious and cultural institutions, not to mention brutally killing religious and ethnic minorities, systematic attacks that the U.N. has called "cultural cleansing."

The Mosul Public Library was a cultural hub for the people of Mosul and housed thousands of books and artifacts that date back to ancient times. But on Saturday, it was demolished using improvised explosive devices, according to the library's director, Ghanim al-Ta'an. Prominent figures in Mosul tried to convince ISIS to leave the library alone to no avail.

According to Qusai All Faraj, former assistant director of the library, the institution is as old as modern Iraq itself. Established in 1921, the Mosul Public Library has collected over the years rare Syriac books printed in Iraq's first printing house, old books from the Ottoman era, rare manuscripts from the 18th century, Iraqi newspapers from past decades, and even ancient antiques.

The library was looted and destroyed during the Iraq War, but it managed to survive because residents were able to salvage many of the books, and wealthy families were able to purchase back the stolen ones. Under ISIS's control, it's a different story — the library and its patrons helplessly watched as it burned to the ground.

In December, ISIS similarly raided and destroyed Mosul University's Central Library, burning roughly 2,000 books that included texts on philosophy, science, culture, poetry, and even children's books. The only publications they preserved were Islamic texts. According to a resident living nearby who spoke to the Associated Press, an ISIS militant explained, "These books promote infidelity and call for disobeying Allah, so they will be burned."

Altogether, ISIS has been able to destroy an estimated 100,000 titles in their raids, according to local Iraqi officials.

On the same day that the Mosul Public Library was bombed, ISIS also burned the Virgin Mary Church in the northern Iraqi city, also using improvised explosive devices. The church has been a sanctuary for the Christian minority in the area and was once protected by Iraqi security forces, but as ISIS gained control of the city, many Christians fled and the church eventually fell at the hands of the extremists. The church was also just one victim of many as ISIS continues to ravage religious institutions in its campaign to eradicate Christianity.

This destruction marks a new phase in the cultural cleansing perpetrated in regions controlled by armed extremists in Iraq. It adds to the systematic destruction of heritage and the persecution of minorities that seeks to wipe out the cultural diversity that is the soul of the Iraqi people.... Burning books is an attack on the culture, knowledge, and memory.

ISIS's book-burning campaign is a sobering reminder that what the group seeks to destroy is not always tangible, and no amount of airstrikes can counter that.Images: Getty Images (2)