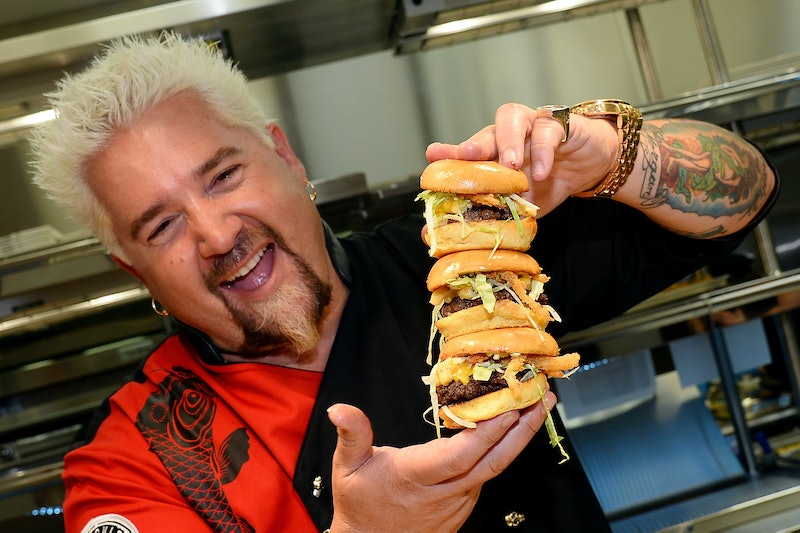 Today in "news that sounds like the product of a pop culture headline-randomizer," Guy Fieri officiated a mass same-sex wedding. First of all, good for him! Second of all, the idea of Fieri as a wedding officiant is the most marvelously absurd thing I've heard all week. And guys, I heard that Kim Kardashian is learning to play the piano this week, so that's saying something.

The Diners, Drive-ins, and Dives host reportedly presided at a giant ceremony for 101 same-sex couples held on Saturday in Miami at the South Beach Wine and Food Festival. According to The Hollywood Reporter, the event was the brainchild of celebrity chef Art Smith. Smith reportedly thought up the concept to celebrate that the ban was lifted on same-sex marriage in Florida back in January. The 101 couples in put themselves in the running to get married at the ceremony by tweeting with the hashtag #101gayweddings.

You may be asking yourself, Why Guy Fieri? I can see this guy as a cheesy wedding emcee, but as the mediator of sacred vows? Well, as it turns out, LGBT causes have personal significance to Fieri. His late sister was a lesbian, and he reportedly wanted to participate to honor her memory. That's actually really nice, and even if he still has that goatee, I can't knock him for participating in this.

Also, the reality of this event allows me to dream up the ridiculous spectacle of having Guy Fieri officiate your wedding. I'm imagining that his sermon would go something like this:

Dearly beloved dudes and dudettes, we are gathered here today at Guy's American Kitchen and Bar in the presence of this OFF THE HOOK crowd to join you two gangstas in holy matrimony!!!! Love is so money, and you don't even know it yet. It's like a never-ending ride on the bus to flavor town!! It's like eating one of my Bacon Mac 'n Cheese burgers with a side of disco fries for every meal!! To express my overwhelming emotion, I'll now take a bite of this SICK MESQUITE CAROLINA SLOPPY JOE that I made on my show.

[Takes bite of pulled pork sloppy joe he has on hand & moans in pleasure] THAT'S what marriage is like, and I'm SO psyched for this cheesy jalapeño Tex-Mex crazy life journey that you're kicking off right here, right now. Please, take your complimentary Dorito-infused tequila shots, and forever hold your peace!! WINNER WINNER, CHICKEN DINNER!!!

Not a dry eye in the house.