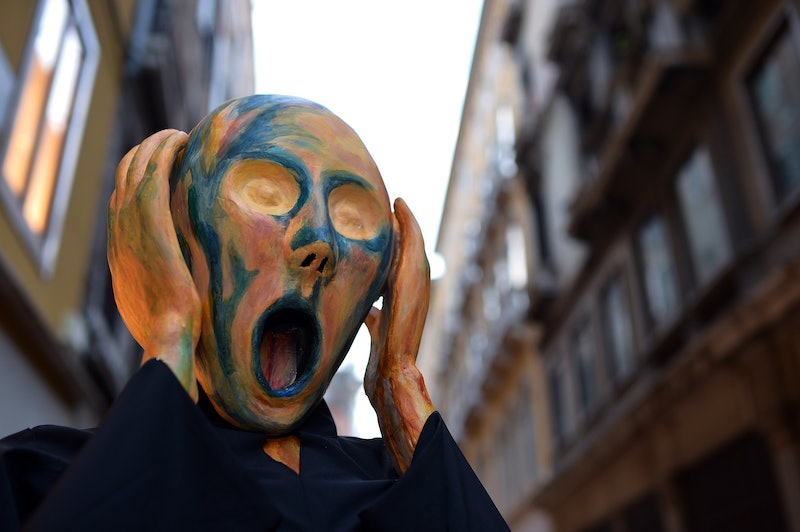 We all know (and probably both use and abuse) the expression "scared to death" — but is it possible to actually get so frightened you die? A number of recent news stories seem to suggest that you could. In 2009, for example, a man in Charlotte, North Carolina was charged with first degree murder of a 79-year-old woman whom he supposedly scared to death. How? He hid in her home, then sprang out at her — giving her a heart attack caused by sheer terror in the process. Furthermore, in October of last year, the media reported that a teen girl was scared to death in a Ohio haunted house, also due to a heart attack. And in 2013, a Brooklyn father of eight reportedly died of fear after getting into an argument with the cops. All these stories have a strange thread in common: Death by fear.

The folks over at AsapSCIENCE decided to explore the question of whether or not you can literally be scared to death in their new video. The video talks about why we fear what we fear, how we perceive certain types of threats (and whether or not we can change our attitudes to be less afraid of them), how heart health is related to fear, and of course, the answer to the question: Can you actually be scared to death? I've been looking for a legitimate excuse to make my roommates stop watching horror movies when I'm home — and it looks like I may have just found it.

Here's how it breaks down in five pictures; scroll down to watch the complete video:

Research suggests that today's most common fears are actually deeply rooted within us and go back to the days of our ancestors. It makes sense to fear things like spiders, heights, small spaces, needles, and sharp objects because these are the things that most commonly killed our ancestors. But research also suggests that sometimes it's not the actual threat of the thing that induces fear; rather, it's the perceived threat. For example, fear of the dark comes from the anxiety that there may be something lurking around that you can't see, not the anxiety that something is certainly lurking around.

2. So... could the perceived threat of things like spiders, the dark, and needles actually kill you?

Basically, yes. But how does it work?

3. The chances of you being scared to death depend on your heart and your "fight or flight" response.

When something frightens you and your fight or flight response is activated, your body releases adrenaline. This causes your heart to beat quicker, as well as making you stronger and faster — thus enabling you to escape the threat more easily. However, it's possible for your body to release too much adrenaline, which can actually damage your heart tissue — and sometimes even stop your heart from beating altogether.

4. Have we ever seen this happen IRL?

In fact, yes. Athletes often experience fatal levels of adrenaline during competitive sports; so, for that matter, do the fans in the stands who get extraordinarily worked up, only for their team to be met with a loss or disappointment.

...because your heart stopping due to fear is pretty unlikely, especially if you have a healthy ticker. What can you do to prevent fear from getting the best of you? Train yourself to think differently about the things that scare you. Remember, that spider is probably more frightened of you than you are of it. Oh, and that needle? It won't kill you — it's actually there so you won't get an awful infection (or, if you're heavily pierced like me, it's there to help make you look shiny and pretty). You've been scared plenty of times in your life and hey, you're still here, right?

More like this
How To Protect Your Digital Privacy If You Need An Abortion Post Roe v. Wade
By Kaitlyn Wylde
How To See The Lunar Eclipse On May 15-16, 2022
By Kaitlyn Wylde
How To Fight For Reproductive Rights, Based On How Much Time You Have
By Courtney Young
5 Crystals For Anxiety
By Megan McCarty
Get Even More From Bustle — Sign Up For The Newsletter