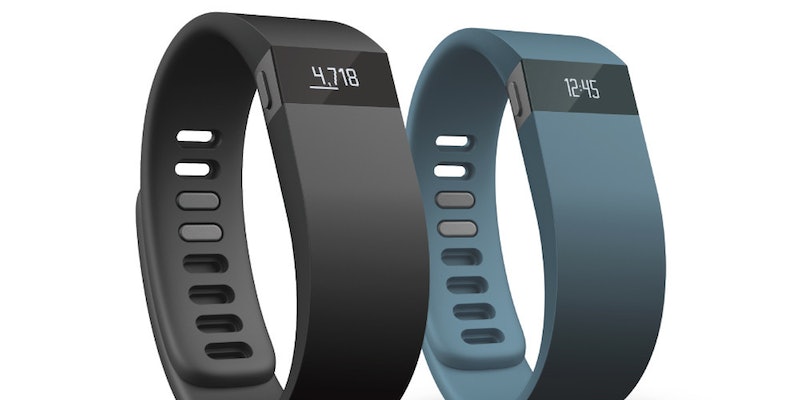 The humble watch has lost ground in recent years, but believe us: watch analysts of the future (of course they'll exist, it's the future) will point to this moment in time as when watches started making a comeback. And they've evolved a lot: take the the Fitbit Force watch, launched Thursday by activity-tracking company Fitbit, which tracks your calorie intake, sleep patterns, the "active" and "static" minutes of your day, fluctuations in your weight and body fat percentage, and a whole lot more... and sends all of the information to your cell phone and computer as clean, pretty graphs. Really, who needs the National Security Agency all up in your business when you're monitoring every split-second of your own activity, anyway?

It's hard to say where smartwatches end and "fitness trackers" like Fitbit begin, because smartwatches both on the market and about to hit it (cough, Apple, cough) already have pedometers and a micro-App store for all your tracking needs. The distinction is mostly in the primary goal: Apple, Google, Samsung, and others are building watches to act as a "second screen" for your phone. Fitbit, which put out a moderately successful "tracker band" last year, is billed primarily as a one-stop-shop for monitoring your own physical input, output, and general activity. Oh, except the newest version syncs with iPhones to show you when you're receiving calls, tells you the time, and pairs with Android to act as a "second screen."

Still, there is cause for concern: some analysts have reported security problems with Fitbit's technology. Like Apple's Touch ID and moderately-encrypted information in general, it's far from impossible for a decent hacker to break into your information. Or, like some of Fitbit's users, you can just forget to turn off the "public" setting and have your sex life broadcast on Gizmodo, which should make things easier for said hackers.

According to tech-and-business site Gigaom: "A team from Florida International University has shown that Fitbits can be subject to attacks including denial of service, injection, and data capture," they announced back in April. "Many of these problems stem from the fact that the Fitbit uses plain HTTP in its communications, exposing usernames, passwords, and data to opportunistic attackers. A suite of tools to probe the Fitbit created by the researchers was able to capture data from any Fitbit tracker within a radius of 15 feet."

It's not clear if Fitbit has taken steps to correct the security issue, but bear in mind that the function of the Force watch is to track everything: your location at any given moment, when you sleep and wake up, what you eat, where you go. Privacy concerns aside, this information going public would make your home and possessions susceptible to attack.

The Fitbit Force is slightly more expensive that its predecessor at $130 — the last was $100 — but this remains a cut below the price of most "fitness trackers," the most prolific being Nike's Fuelband and Jawbone's Up. LiveScience gave it 14 of 20 stars, and the Huffington Post names it as a frontrunner in the "wearable tech" trend, which is "still in its infancy and set to explode."

More like this
8 Types Of Avatars You Can Customize In The Metaverse
By Ginny Hogan
Why Can’t I Go Live On Instagram?
By Emma Carey
TikTok’s “Miley Stewart Summer” Trend Will Make You So Nostalgic
By Courtney Young
How To Add Music To An Instagram Post
By Emma Carey
Get Even More From Bustle — Sign Up For The Newsletter