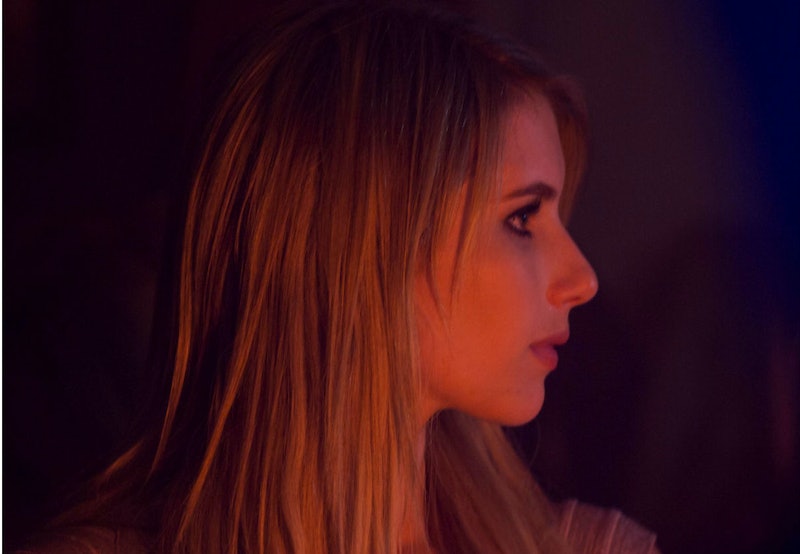 Thanks to the American Horror Story: Coven premiere, the TV ratings system needs a new warning. The TV-MA (a.k.a. "don't watch this if you're under 14 and your parents are home, otherwise carry on") rating isn't hacking it. We need TV-EMA, TV for the emotionally mature. During the season premiere of AHS: Coven, it became clear that only harm can come from certain fans enjoying the sinister show when groups of them began cheering on the rape of Madison Montgomery (Emma Roberts) via Twitter.

The scene in question — which might be one of the most brutal rape scenes on recent television outside of Sons of Anarchy — finds Roberts' character, a snobbish former starlet, being drugged and gang raped by a series of sloppy, laughing frat boys until Evan Peters' Kyle rushes in to stop them. The perspectives in the scene are what make it so invasively difficult to watch: It's shot from angles that align our view with that of the victim, watching ghoulish goons hump happily while Madison is rendered helpless but not unconscious by the drugs they slipped her. Despite the deplorable attitude exhibited by Roberts' character before she's drugged, it's certainly not a scene worthy of whooping it up. This scene is not about a brat being punished for her brattiness; there is no excuse or reason for this violation. It's senseless brutality, plain and simple, and it's a crime strong enough to awaken the witch in Zoe, who later exacts her revenge on the disgusting lead frat boy by having sex with him until he dies. (Quick background information reminder: Zoe's lady parts are toxic and kill anyone who has sex with her.)

Yet, somehow, some fans took to Twitter, expressing joy at the brutality of the scene — many of them because they dislike Roberts as an actress. "So happy @RobertsEmma got frat raped in #AmericanHorrorStory her acting is so lame. But that was funny. I'm going to hell, wait...I'm here," tweeted one fan. "Emma Roberts getting gang-date raped, sweet," wrote another. Some folks even identified with the college boys doing the dastardly deed, "Shit, I would drug Emma Roberts just to have sex with her," or wished the real version of the scene upon the actress saying, "i hope emma roberts gets raped." The callousness of these reactions varied, but one truly disturbing element remains a current throughout: These people think rape is a joke.

The thing is, I thought we already covered this when Daniel Tosh had his public flogging for telling a female audience member it would be funny if she got raped. It opened up months upon months of public debate, with much of the crusade led by Jezebel writer Lindy West, who deftly debated comedian Jim Norton on the topic of rape humor. She argues:

I believe that the way we speak about things and the type of media we consume profoundly influences how we think about the world ... I do believe that comedy's current permissiveness around cavalier, cruel, victim-targeting rape jokes contributes to (that's contributes—not causes) a culture of young men who don't understand what it means to take this stuff seriously.

The response to West's fantastic, educated, conscientious arguments was a barrage of comments like "that big bitch is bitter no one wants to rape her" or "wouldn't the best ending be that Jim Norton rapes the fat girl," completely proving her point.

Now, in response to a truly disturbing moment on television, the cavalier masses strike again, proving that West's (and my) fears are very real. Troves of young people — men and women, alike — find no issue with joking about rape, fundamentally detaching themselves from the true weight of the word and allowing themselves to turn it into a vehicle for a few measly retweets. They've found enough detachment from the word "rape" as they have from accepting Roberts is a real person and that acting is her job, not a mystical veil that turns her into plastic so she can safely absorb threatening Internet comments.

The fact that social media allows users to lob these hateful comments from an often impenetrable barricade, behind which they can safely snicker, only heightens the desire to test the limits of what they can say and get away with. Certainly, that element of social media is a big piece of why comments like these continue to crop up. But to say that there isn't a larger issue here, in which young people seem to hold some lighter definition of rape in their minds, which they reserve for jokes and pithy quips and keep as far away from its true meaning, would be missing the point.

Some portion of our larger comedic discourse made these people think these "jokes" are alright. Something is suggesting that cheering on rape is hilarious as long as you're not actually doing it. And something in this picture is terribly, terribly wrong.