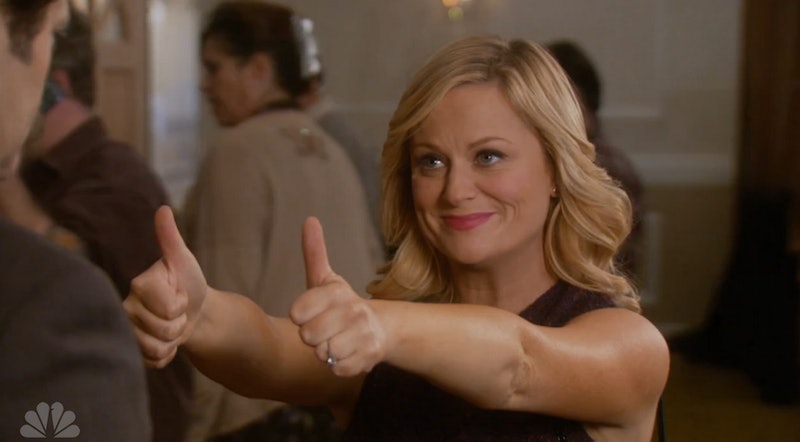 Get ready to feel the most delightful mixture of delighted and sad: Parks and Recreation 's final episodes air Tuesday night. It's the farewell to a show that has most definitely left its mark on our hearts, and a mark on the television landscape around it. There will be a lot of words written in the week surrounding the series' ending about what this show has meant to all of us — from Ben Wyatt's place as a masterful nerd role model in the age of Gamergate, to Leslie Knope's place as a great television feminist. It's a show that's earned a thousand tributes.

It's also a show that, throughout its years on NBC, has proven to be one of the smartest and most grounded on television. If How I Met Your Mother taught us anything — both throughout its nine seasons and in its much-maligned finale — it's that even the most beloved of sitcoms are not immune to wildly erratic decision-making at the hands of its writer's room. But Parks and Rec, among with many other parts of itself, should be remembered as a show that had a good head on its shoulders — as one that consistently knew itself and its main characters. I've trusted this show more than any others for all my years of watching it; somehow I just knew that more than any other comedy out there, Parks would stay true to itself and to Leslie.

Parks was and is not without its imperfections — not every storyline sold, not every line sang. But overall, it did about as well as you can expect any sitcom to. So in honor of its farewell, here are some of the best decisions the writers and producers ever made.

The show's guiding light and the unceasing talent that served as its face and tied its cast together. Her presence cannot be underestimated. Without her this show would not be what it is.

Putting A Stop To Leslie Being the Butt Of the Joke

The first season of Parks and Rec reads very differently than the rest for a number of reasons, but the biggest reason lies in how the show treated its main character. Leslie Knope was always an overwhelmingly earnest government employee, but in the first season she was also often laughed at by her own show. A switch happened in the second season, and it's one of the best things the writers and producers ever did: Leslie stopped being a Michael Scott-type hero and started being her own type of hero. It was the true start of the series' legacy: That you can have a comedy that is kind and still have it be among the funniest things on TV.

Megan Mullally's early episodes of Parks and Rec will always be among the best, in part because the fact that she and Offerman are married in real life allowed everyone involved to go straight-up balls to the wall on this ridiculous relationship.

Rob Lowe was a great hire for the show, but Adam Scott was the one that had the most payoff. Leslie's love life had always been cute and fun, but something just clicked when Ben Wyatt entered the scene. He was awkward and nerdy and saw everything in Leslie that the rest of us did pretty much as soon as he got there, he's made such a good partner for her in the years since. This has always been Leslie's show, but she deserves that partner. Aside from the romantic aspect, too, Scott was simply the perfect addition to the show's ensemble.

The Slow (But Not Too Slow) Burn Of Leslie & Ben

Season 3 of Parks is a masterpiece. That's due to a lot of things — great pacing, great everything — but one bright spot in that brilliant season was watching Ben and Leslie begin to crush on each other and not be able to stop. Slow burn will-they-won't-they can be hard to pull off in the modern post-Dawson's Creek world in part because, well, we've already seen so much of it and you can't just force a Jim and Pam type of chemistry to appear. But this felt so genuine, and it held a real conflict: Leslie loves her career more than anything, so what happens if she falls for someone who her career forbids a relationship with? The show managed to explore that without ever betraying the core of Leslie's character.

Expanding On the Entire Ensemble

The first few seasons everything is very Leslie-focused, which is understandable. Ron, Ann, and Tom sometimes got things, too. But giving Aubrey Plaza, Retta, Jim O'Heir, and everyone else the room to become full characters was crucial to the inclusive energy of Parks and Rec. Can you imagine Parks without "Treat Yo Self?" Exactly.

Getting April and Andy Together

They're the yin and yang, like a cat and a golden retriever got together. That they got married so quick was, of course, rash, but it put the lid on their will-they-won't-they just in time for Ben and Leslie's to really kick into high gear, and it ensured that this show never piled too high onto the romantic drama, which it was never really about.

When you have a character who is as ambitious and earnest as Leslie, it would be a bit of a bummer to spend seven seasons with her without her ever actually getting any of the things she was reaching for. The scene where Leslie wins the city council seat still makes me cry, and for someone who is as good at her job and as much of a go-getter as Leslie, it makes sense that she'd go farther than Pawnee. The presidency was always out of reach, but she had to go somewhere, and where she did was pretty sweet.

Ending When It Did

I will be sad to see Parks go, but I'm also glad they chose to bow out when they did. The Office was a great, landmark show, but its memory is forever marred by seasons of decline. It didn't deserve that, and neither does Parks and Rec. There are no boring or awful seasons of Parks and Rec (though the first season is debatable), and its farewell lap has been one of the best final seasons I've ever seen. It's time to let Pawnee and its ragtag government go. And it is a mighty bittersweet moment.