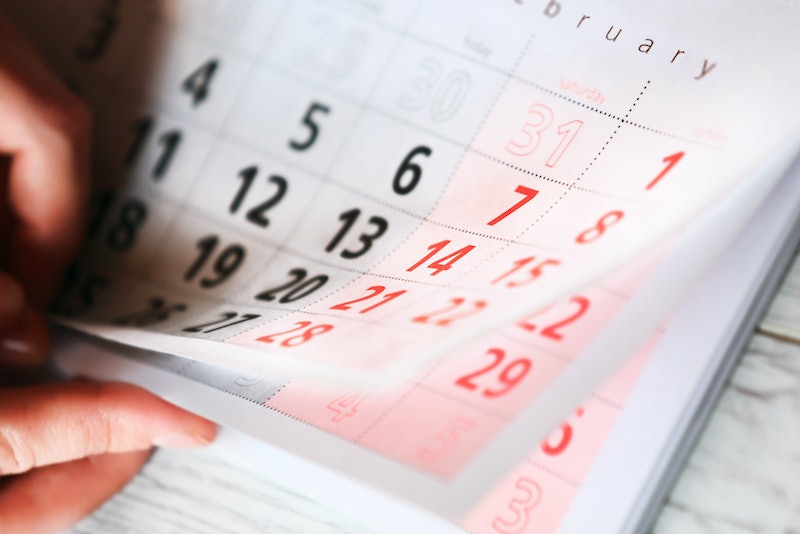 Since today is the 28th and final day of February, it seems like as good a time as any to figure out exactly why February has 28 days, doesn't it? Luckily, Joe Hanson of the webseries It's Okay to Be Smart has a nifty video exploring this very topic. Ready to delve into the crazy world of calendar science? It's a little dizzying, but the trivia is so cool that it's definitely worth it. I promise.

Basically, it all comes down to ancient history. The calendar we use today is called the Gregorian calendar, which you may already know is based on the Julian calendar implemented in Rome by Julius Caesar circa 46 B.C. What you may not know, however, is the fact that the Julian calendar was itself a variation on a theme. Romans centuries earlier had laid the groundwork for what Caesar would later do by creating the Roman calendar — the influence of which you can still see in the names of the last four months we still use today.

Since we have the Romans to thank for the calendar as we know it, though, that means we can also blame them for some of the weirder elements of it — which includes the fact that February is so damn short in comparison to all the other months. Here's the general gist of it according to It's Okay to Be Smart:

1. The whole 28-days-in-February thing is the Romans' fault.

Romulus, who was the first king of Rome, had a bit of a problem: The Romans were celebrating so many things — festivals, religious celebrations, you name it — that they were starting to find it a little difficult to keep track of everything. The calendar was meant to fix that problem. Astronomers at the time already knew how many days passed between equinoxes — but the Romans also already had a nice, handy way to keep track of time that didn't involve any fancy calculations: The phases of the moon, which they could see with their naked eyes.

2. How the lunar calendar works:

By relying on the moon to keep track of time, the Romans ended up with a year consisting of 10 months, each with 30 or 31 days… and a big ol' empty hole in the middle. You see, they kept track of specific days from what we now call March and December only. The remaining 61.35 days were left unaccounted for, mostly because the Romans just didn't care. It was winter then, which meant it was and therefore really easy to die. They were all too busy trying to stay alive to care about much else, so they just went about their business surviving until the new moon before the spring equinox. Then they started to keep track of things again.

He was the second king of Rome, and he tried to change the calendar up a bit. Roman superstition believed even numbers to be bad luck, so in order to make sure all those 30-day months didn't mess up his people's jam, Numa Pompilius subtracted a day from all of them. He also decided he wanted his calendar to cover 12 cycles of the moon; since that resulted in an even number of days in the year, though, he rounded up such that a year on his calendar was 355 days long. Then he made two more months out of the additional days.

4. Here's what the calendar looked like after Numa Pompilius was done with it:

12 months, 28 days in February. But wait! 28 is an even number — isn't that bad luck? Yes, but because the month was devoted to purification, everyone just kind of let it slide. Go figure.

You may have noticed, though, that the calendar still looks a little weird. For one, January and February are at the end of it, rather than the beginning; also, the number of days in the year still doesn't add up to 365; and hey, what's the deal with Leap Year? I'll let you watch the video to see how it all shakes out — it's kind of complicated, but it's also super cool. Here, check it out:

Images: Fotolia; It's Okay to Be Smart/YouTube (4)