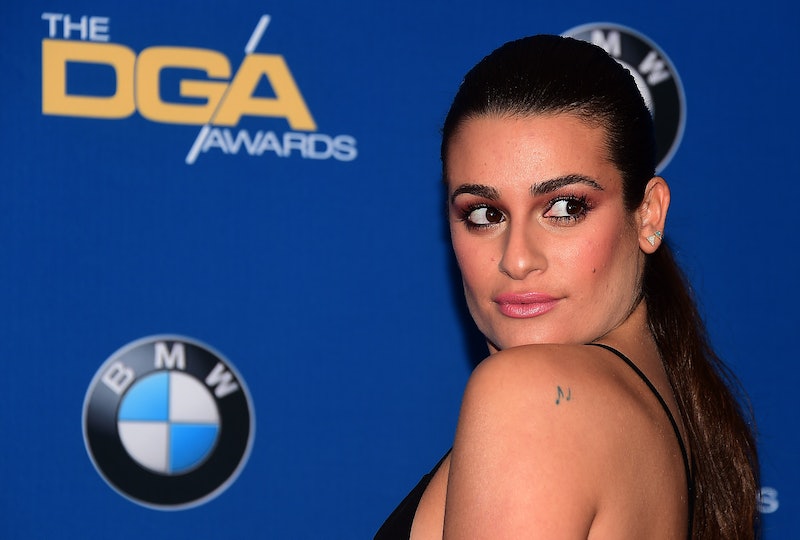 Glee is wrapping up its sixth and final season in March, which means its time for fans to say goodbye to the characters that they've grown to love over the years. Tragically, fans bid farewell to one cast member and character far too early: Cory Monteith, who played football quarterback and New Directions original member Finn Hudson, died in June of 2013. Finn was a major piece of what made Glee so special, and it was only fitting that Finn was honored in the series. One way that the show paid tribute to both Finn and Monteith was to have Finn's jersey hung up in the show's choir room set piece, something that we still see whenever the show films in that location. Now that the show has wrapped and the sets are coming down, it's only fitting for that jersey to be placed somewhere special: Lea Michele just posted an Instagram picture of her taking Finn's jersey as a souvenir from the Glee set, and it's both heartbreaking and sweet.

The jersey is a perfect piece for Michele to take home with her. On the Glee episode "The Quarterback," which paid tribute to Finn after revealing that the character had died off camera, the original members of the New Directions actually fight over who gets to keep the jersey. Puck wants it, Santana wants it, Kurt wants it — everyone wants this major symbol to remind them of who Finn was. Ultimately, the jersey gets placed where it needs to be, which is in the choir room where everyone can feel like they have a piece of it.

The choir room will cease to exist and that jersey — which represents Finn but also the real-life Monteith — deserves to be with someone who loved him.

Michele has gotten a bit of flack in the nearly two years since Monteith's passing for seemingly moving on from his death (which couldn't be more of an insensitive thing to speculate about, FYI) but this photo proves that Monteith is still very much in the thoughts of both Michele and the entire cast of Glee. I wouldn't be surprised if there was a discussion similar to that of the one in "The Quarterback" over what to do with this symbol.

Monteith was an important person to so many people, and from the way the Glee cast reacted to his death, it seems like this show really did become a family. I'm happy that Michele, his girlfriend and a member of that family, got to walk away from the series with it.