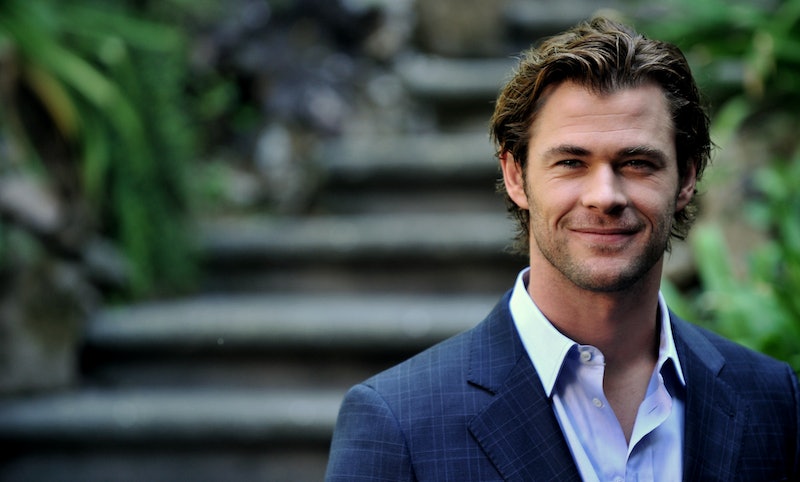 He may be the Sexiest Man Alive, but will Chris Hemsworth be the funniest man alive when he hosts Saturday Night Live on March 7? That's a question that will remain unanswered until March, but we are praying to the Norse Gods that our favorite Hemsworth doesn't bomb during his SNL debut. Hemsworth will appear alongside musical act Zac Brown Band (who will also be making their debut performance).

Chris Hemsworth's newest film, Avengers: Age of Ultron, does not come out until May but Thor is getting a head start on his promotional tour with his appearance on the infamous SNL stage. Hemsworth will be following in the footsteps of his baby brother, Liam Hemsworth, who made a brief appearance on Saturday Night Live late last year in a skit alongside Woody Harrelson.

Hosting SNL is a big deal and could officially secure Hemsworth's status as a triple threat, the likes of which we've seen by SNL guest like Justin Timberlake. Hemsworth is already hot and talented, if he can add funny to the list, he'll truly be an unstoppable force (even without his hammer).

I'm sure looking forward to Chris Hemsworth on March 7 and here's a few reasons why you should look forward to it, too.

He Will Definitely Be Shirtless At Least Once

He just needs to do his opening monologue shirtless. He doesn't even need to be funny; the crowd will still love him regardless.

His Hair Will Look Fabulous No Matter What

Chris Hemsworth may not be an actual god, but he has the hair of one. Regardless of how he wears his hair, it always looks like he just stepped out of a Pantene commercial. Seriously, Chris Hemsworth has amazing hair. If we can count on anything, it's that his hair will be tousled to perfection.

They Might Make Him Dress Up As Thor For The Show

When Jeremy Renner appeared on Saturday Night Live three years ago, they made him dress as Hawkeye. Maybe it'll be our lucky day and the SNL writers will put him in a skit where he has to appear as the mighty Thor.