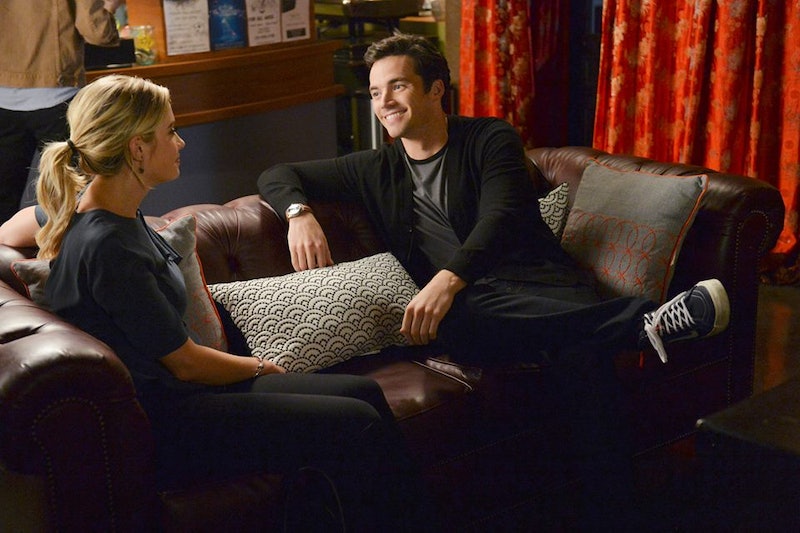 Do we already know who "A" is on Pretty Little Liars? Well, if we didn't before — on Tuesday night's new episode, two weeks ahead of the series' #BigAReveal, PLL dropped a HUGE "A" clue when Aria and Hanna went to visit Cyrus in the hospital. I know you're wondering who Varjack is on PLL after watching "Bloody Hell" and, hopefully, you're not drawing a blank. Because, as far as I'm concerned, Ezra is "A" on PLL because Ezra is Varjack. Don't believe me yet? Well, the proof is in the Season 4 finale, people. The "A"-game is finally up.

After getting kicked out of Cyrus' room, Hanna had a epiphany about what Cyrus had written on the tiny piece of paper. He wasn't telling them how he was injured, he was telling them WHO injured him — obviously we know that the "who" is "A," but apparently "A" goes by a different name in his inner circle. Hanna realized that Cyrus had written Varjack — the male lead in Breakfast at Tiffany's. If Aria had any memory at all, she'd remember that back in the Season 4 finale, "How Ali Met Ezra," Ali told the liars that on the night they met, Ezra told her that "she reminded him of Holly Golightly."

AND NOW ALL OF THE PIECES FIT TOGETHER, PEOPLE. Aria remembered that Ali's fake passport was under the pseudonym "Holly Golightly" and if Ezra is still as in love with her as he once was, he absolutely thinks he's Varjack. Here's the scene from the Season 4 finale where Ali recounts her story about her first time meeting Ezra:

There you have it, people. Ezra is "A" and we now know it once and for all.