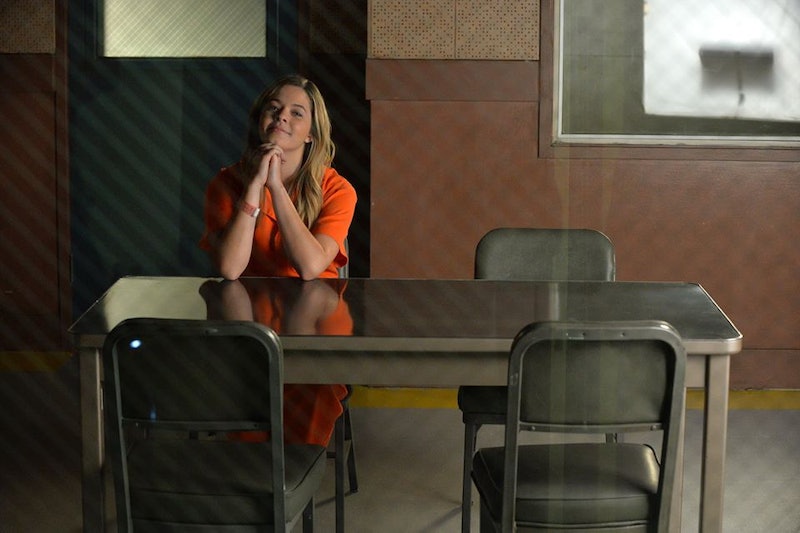 Let's just put one thing out on the table here, upfront and in I. Marlene King's face — I want to know who "A" is. And I really want to know right now. Which, if you're a diehard and lifelong (it seems like it's been a lifetime) Pretty Little Liars fan, isn't a new demand to make — after almost five seasons of red herrings and dead ends, it seems like that time is now. During last Tuesday's episode of PLL , ABC Family teased a #BigAReveal coming in March, which was confirmed by Toby himself. PLL star Keegan Allen dropped spoilers to Bustle last week that the upcoming "A" reveal will be "heartbreakingly beautiful." Which really changes the game, doesn't it?

I've been thinking this entire time that "A" is just some pissed off college student whose toes got stepped on by Alison one too many times. Or, you know, Wren. But Allen's spoilers hint that we're in store for something entirely different when PLL finally pulls the black hoodie back to reveal the face of "A." The actor told Bustle that it's more important to understand the why behind "A," rather than the who. And by calling the reveal "heartbreakingly beautiful," it really narrows down the extremely long list of suspects that've been in the running to be the mastermind we know and are terrified by as "A."

So, with these new details — straight from a former "A"-team member's mouth, might I add — which of our usual suspects could be "A?" And how likely are some of them to actually be the person under the black hoodie? Let's do some Spencer-level detective work.

I'm sorry, but I'm still not convinced that Ezra ISN'T "A." But I am convinced that he'd have a beautiful and tragic story (he's a writer, after all) about how he became "A" and what drove him to terrorize the lives of multiple people in Rosewood for years on end. He was in love with Ali and spent a good portion of his relationship with Aria using her to get information for his book and form his theory that Mrs. D was "A."

Don't get me wrong, I love Toby and I really think he's a good person. But, can any PLL fan forget seeing him in a black hoodie? I know what you're thinking — he only did that to protect Spencer and her friends. He went literally into the belly of the "A" beast and posed as an "A"-team member just to get insider info. But, what if there were more to it than that? Mona seemed eerily reverent to Toby during his time on her squad and, I mean, he has a motive.

Look, the whole DiLaurentis family has secrets and I don't think Mr. DiLaurentis is an exception. Why did Mrs. D want to keep secrets from her husband? Why did she tell Ali to do the same? Maybe Mr. DiLaurentis has more to do with all of the drama in Rosewood than we thought and, well, he's been conveniently absent for most of the series.

Oh, she's dead, you say? Well, if you show me the body, I'll take your word for it. Mrs. Cavanaugh has been a mystery ever since Radley was introduced to the series. Did she die? Did she not die? It'd be pretty heartbreaking to find out that Toby's mother has been behind all of this all along, but beautiful? Unless she's been searching for justice, she only fits half of the bill.

Look, it'd be totally apeshit and oddly beautiful if Mike were "A" after all. I was convinced by his tears during last Tuesday's episode — he loved Mona and he doesn't know whether or not her plan worked — but what if he were just pretending? That'd be some next-level, super-PLLplot-twist and I'm 100 percent down with that scenario playing out. Mike started dating Mona because he sensed that she was about to spill the beans about "A" and then he killed her? Boom.

Tumblr user plldailly compiled this interesting group of gifs that really point the finger at Spencer Hastings. First, there's Spencer's former pill addiction, which seemed shoddily explained at best. And then there's the fact that people are always trying to protect her — especially Melissa who says she's been protecting her since "before it started." What would be beautiful and heartbreaking and TOTALLY INSANE would be if Spencer's been "A" all along, but it's a different Spencer — perhaps the side of the Spencer that those pills were keeping under wraps.