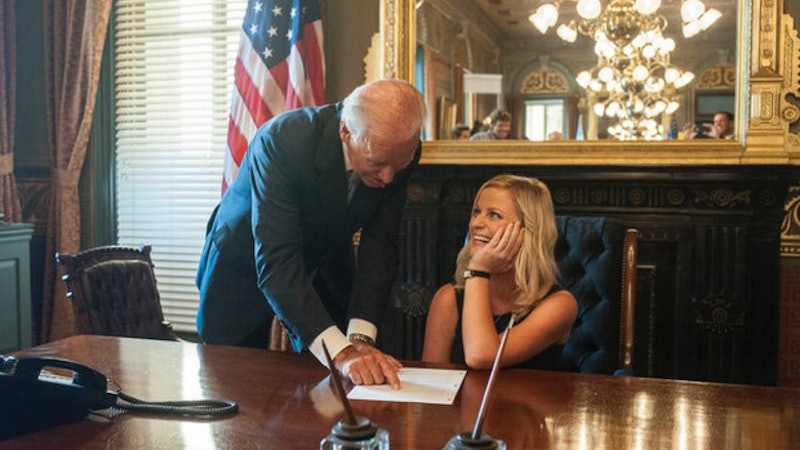 The finale of Parks and Rec was bound to be an amazing episode that brought together all of the original cast members — with the exception of a select few — but who knew it would bring back some of the best guest stars, too. Parks and Rec ended a legacy on Tuesday night with a finale to top all finales. Instead of dwelling on the past — something finales often do — Parks and Rec looked into the future, and that future had some very familiar faces. A few Parks and Rec cameos during the finale were Joe Biden, Horatio Sanz, Henry Winkler, and more, and it was so emotional.

We kind of expected the big guest stars that returned to the show — I'm looking at you Ann, you poetic, noble land mermaid — but some of the special guest stars that weren't cast members at any point were complete surprises. But, just because they were surprises doesn't mean they didn't work into the finale seamlessly. Because the Parks and Rec finale would have been nothing without a casual Joe Biden cameo.

Leslie and Ben visited Vice President Biden's home in 2025, where we learned Leslie has previously schooled him in charades (and that he's a sore loser). Biden's presence in the finale was such a tribute to the wonderful character that is Leslie Knope, mostly because of her undying love — sorry, Ben — for our current Vice President. Sure, it was great he could be in it, but I saw his screen time as paying homage to how far Leslie had come in her life, career, and emotional control (to not attack him with hugs).

Among other guest stars were Horatio Sanz and Henry Winkler. Sanz's cameo was brief, you might have even missed him, but he was there, overseeing Jean-Ralphio's funeral (spoiler: Jean-Ralphio didn't actually die). Henry Winkler — who technically was a cast member, but come on, it's Arthur Fonzarelli — returned as Dr. Saperstein, and delivered Jack Ludgate-Dwyer, which was just a perfect moment in itself.

Then there were the cameos from our favorite recurring guest stars. Jen Barkley made it back, Monalisa Saperstein, Shauna Malwae-Tweep might finally write a story, Typhoon! And remember the bum that Leslie kicked out of sleeping in the slide in the pilot? Well, HitFlix pointed out that the man who asked the Parks Department to fix the swing — their final task — was actually the same actor, making this finale come full circle to where we began.