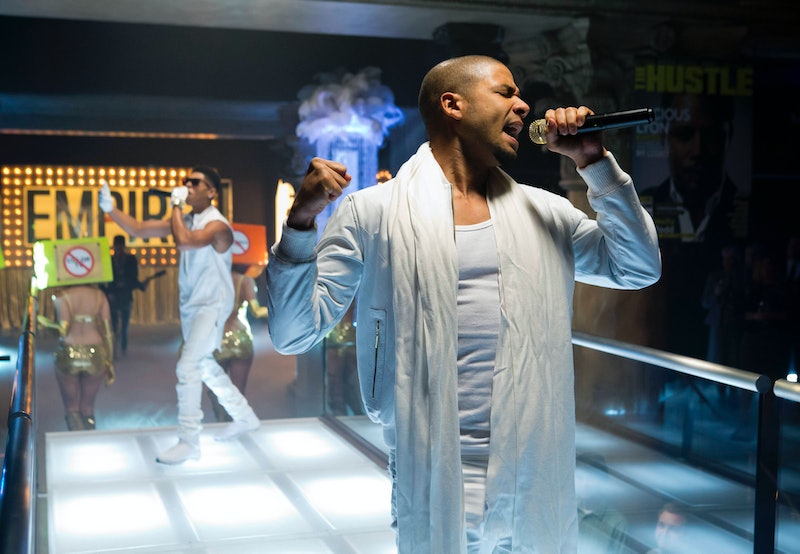 There's more than one way to tell a story and Fox's Empire uses many of them. Aside from soapy plot twists and one-liners, the highly-rated drama series excels at expressing itself through music, too. Every episode includes original songs that are available on iTunes the next day and they've been doing very well on the charts. The Empire: Music from the Pilot five-song EP debuted at No. 8 on the Billboard R&B charts last month. That included the show's theme song, "No Apologies" sung by Jussie Smollett (who plays Jamal Lyon) and Bryshere Gray (who plays Hakeem Lyon). And if you look closely at the lyrics, "No Apologies" tells the story of Empire itself.

That really shouldn't be too much of a shock. Music producer Timbaland, who has produced hits for Justin Timberlake, Aaliyah, and Madonna, curates the tunes for Empire based on the scripts. He'd receive the scripts ahead of time and was responsible for crafting songs to illustrate key emotional moments. "What we're really doing is taking the show, and making it real life," Timbaland told USA Today. "We had a lot of communication — how [they] wanted it to feel, how I thought it should feel, and what I wanted to see on TV."

"No Apologies" is Empire's theme song, and was the show's very first single, released weeks before the pilot aired in January. In a way, it tells the story of the series itself and foreshadows the rivalry between siblings Jamal and Hakeem. It's all in the lyrics.

This pretty much sums up Hakeem as a character on the show. One of his first major storylines was accidentally dissing President Obama in an episode (whoops) and he is truly one of the most reckless characters on the show. Hakeem is also the youngest, most spoiled son on Empire, who carries himself with the swagger of a "legendary" hotshot rapper — but he isn't quite there yet.

I think the chorus describes the theme of the series: Expressing yourself in your own way and not being ashamed. It's definitely something that Jamal struggles with — he's a soulful R&B singer, but his dad won't let him openly express his sexuality. Hakeem, however, almost always does what he wants when he wants, like dating pop singer Tiana and fashion designer Camilla at the same time.

Again, this is about Hakeem's own loose lips and makes reference to the rough crowd he runs with. In one episode, Andre actually uses Hakeem's friends — who he calls "petty thugs" — to rob Jamal at his very raggedy recording studio and begin the rivalry between the two younger brothers.

Will Hakeem ever learn his lesson? Maybe. He does have a lot of growing up to do.

And now a little something from Jamal's point of view. These lyrics definitely describe Jamal's dilemma: Be true to himself and come out of the closet, or stay in and appease the disapproving Lucious, who once literally threw Jamal in the trash when he saw Jamal playing in Cookie's heels. Poor kid.

"The closer you get, the more they hold you back / But a closed mouth don't get fed." Sounds a lot like Jamal's relationship with Lucious, who keeps trying to hold Jamal back. Lucious has openly stated that Jamal is a great songwriter, but not a performer.

This is also another use of the word "legendary" — probably signifying the desire for both Hakeem and Jamal to become legends, just like Lucious.

This verse totally speaks to Hakeem's dependence on his family, despite wanting to make name for himself as more than just being Lucious Lyon's son. But unlike Jamal, who stopped taking Lucious' money, Jamal is totally dependent on his dad.

Hakeem also does happen to reference his very wealthy family in his music, though. This verse is one example. In the song "Live in the Moment," Hakeem raps that "Lucious birthed me" — a lyric that also signals his issues with Cookie, because I'm pretty sure she's the one who gave birth to him.

The song closes out with, literally, no apologies. We even get "you can blame it on Tiana" — wait, why?

Anyway, this sums up the theme of the series: Express yourself, mean it, and don't apologize for it.