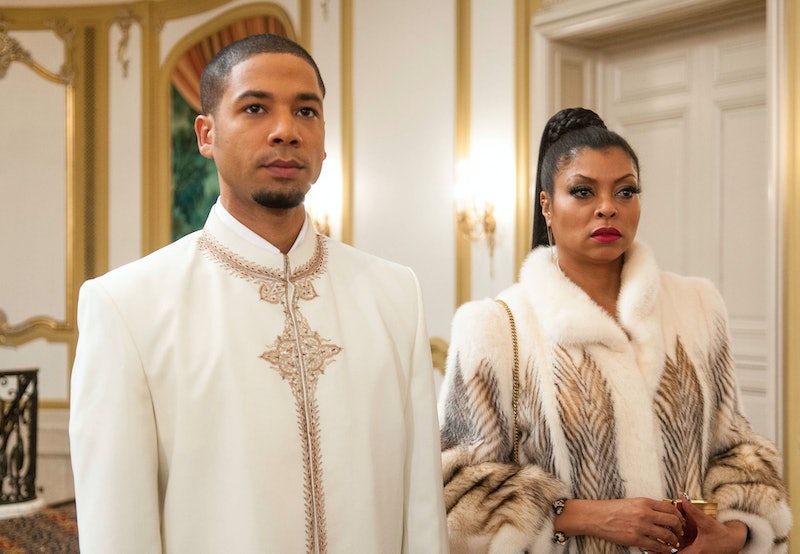 Empire's Jamal Lyon (played by Jussie Smollett) has a lot of secrets. His media mogul father Lucious Lyon (Terrance Howard) wants him to stay firmly in the closet and does not approve of his son's sexuality — or desire to be an R&B superstar. A few weeks ago, a new secret walked in to the lobby and called Jamal "daddy" — his ex-wife Olivia (Raven-Symone) and supposed daughter. And all of that happened right as he and live-in boyfriend Michael were hitting a rough patch and Jamal's singing career started to ignite. That's a lot to handle all in one shot. But there's more to come, according to Fox's summary of Wednesday night's Empire episode — Jamal is supposed to drop some unexpected news, but what could it be?

Fox says that "Jamal steps into the spotlight with news that surprises everyone" — and there are so many things that could mean. One thing it definitely doesn't: Jamal and Michael reuniting. Empire showrunner Ilene Chaiken has stated that the lovers are done-zo. "We felt like it was fraying already, and as much as we love Michael and love the relationship, it seemed clear like in so many relationships — it’s not specific to gay relationships — this is someone Jamal was going to outgrow," she told TVLine. "And more than anything it’s the story of an artist — and it’s something that happens so often with artists as they start to find their voices."

So what could Jamal's big bombshell be? Here are some possibilities.

Jamal Is Adopting His Daughter

Last week, Jamal's baby mamma dropped off his alleged daughter at Empire and then left without a trace. Rhonda, Andre, and Anika took turns caring for the girl as Jamal dealt with everything else going on in his life. He seems to be rather accepting of the news — no paternity test has been ordered quite yet, so maybe Jamal will fully embrace being a poppa on Wednesday night.

But whether or not the child is his will be Jamal's storyline for the rest of this season, Chaiken also revealed to TVLine.

Raven-Symone does have one more appearance on the show, according to The Hollywood Reporter, so her next appearance could be to to try and reunite with Jamal — and for some unknown reason, he agrees. Maybe it's because of his little girl. Maybe it's to appease Lucious. But we know it won't be genuine, because it wasn't the first time around and Jamal would still be hiding who he truly is.

"I can’t tell you, but I will say it is very juicy information about what comes out and, also, what happens between Lucious, Olivia, Jamal, and Cookie," Raven-Symone told Vulture.

Jamal Is Coming Out

This shouldn't be so unexpected, since the Lyon family has known that Jamal is gay since he was a young boy (according to flashbacks), but perhaps this is the episode where Jamal comes out to the public. After all, Entertainment Weekly offered a sneak peek of the next episode's song, which is a remake of Lucious' own hit "You're So Beautiful," sung by Jamal with the following lyrics (over and over): "This is the kind of song that makes a man love a man." Freudian slip or coming out? We shall see.

"Ultimately and most importantly, it is who Jamal really is: he is the strong one," Chaiken told The Hollywood Reporter . "He's extremely talented, but he also has a strength that qualifies him in an unexpected way...and his strength is both innate and a result of the hardships of his life. Ironically but also somewhat intentionally, all of the horrible things that Lucious did to him have made him stronger."