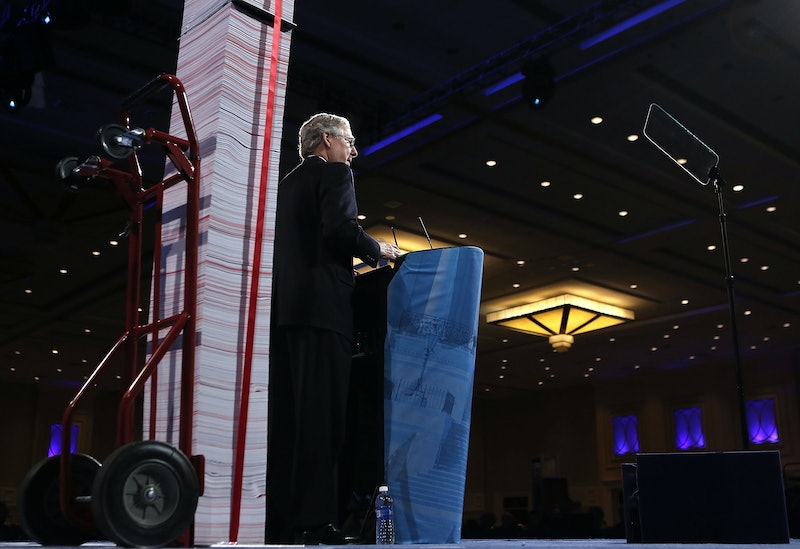 This weekend, CPAC — which will star most of the prospective 2016 Republican candidates — kicks off. A flood of ranking Republicans and activists will flock to D.C. for the nation's largest conservative conference; it's the optimal place for conservative leaders to get their message out to the base. But not everyone will be making the trip — there are a few surprises of who won't be at CPAC this year.

Mitch McConnell has been a regular guest and speaker at the conference in recent years, so his absence comes as a bit of a shock. Last year, the Senate majority leader entered the stage as Bon Jovi's "Livin' On A Prayer" played (yes, really). McConnell then presented a rifle as an award to former Sen. Tom Coburn.

But McConnell is a busy guy right now. Debate is raging in the Capitol over Department of Homeland Security funding, so, let's face it, he's probably better suited to stay at the office instead of attending the year's biggest Republican field trip. This is also stopping House Speaker John Boehner from hitting the conference circuit. But not everyone is convinced this isn't a snub from the grassroots conference to GOP leadership (Boehner hasn't been invited by CPAC since 2010).

A statement released by Boehner's office denies any rift between the speaker and CPAC organizers.

Speaker Boehner’s responsibilities in the Capitol, and his travel schedule, will not allow him to attend this year, but he has always had a good relationship with [organizers] and that hasn’t changed.

One of the most interesting CPAC absences remains Mike Huckabee. It's understandable why party leaders who have a job should be at their desk. But the former Arkansas governor and FOX News host doesn't have any obligations and he is currently looking for a job (spoiler alert: it's at the White House). CPAC is the place to go if you're a Republican considering the Oval Office.

A representative of the governor confirmed to Politico that Huckabee will not attend CPAC, but will instead be traveling to Greenville, South Carolina for a roundtable discussion. He also has two media appearances that interfere with the conference's dates. In the past, Huckabee has done poorly in the CPAC straw poll — he finished tenth last year. He certainly won't fair better in the poll if he doesn't speak at the conference.

Before you get too bummed, there are more than enough 2016 candidates to go around at CPAC. Really, there are a lot.