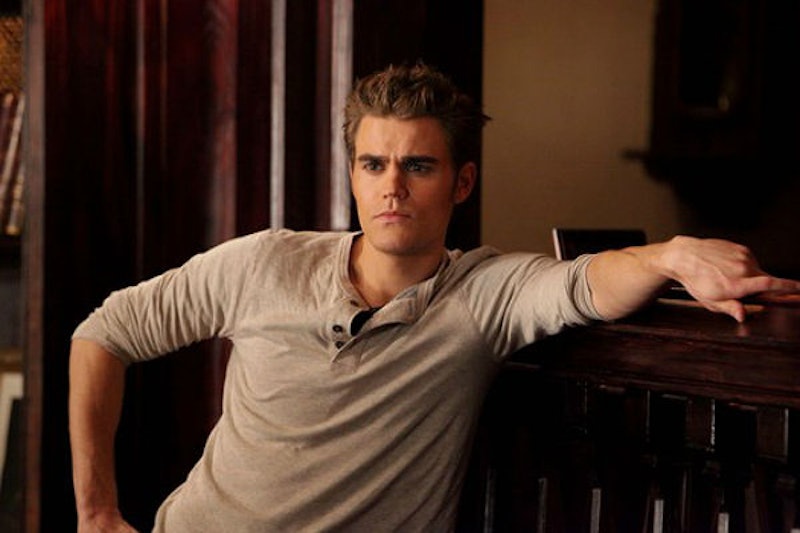 Thursday, the new episode of The Vampire Diaries continues its foray into Klaus-less territory with the second episode of Season 5, "True Lies." With the Originals off exploring New Orleans on their own series, TVD is left with some pretty hefty gaps to fill and so far, it's coming up pretty short. There's little fire in Elena's quest to find out why her dead college roommate knew Elena's father; Matt is entangled with a woman whom he and Rebekah (yes, "and") slept with during their whirlwind summer travels; and Stefan is in Davy Jones' locker while his apparent Doppelganger, Silas, is running around killing town mayors in plain sight. It's clear that the writers are attempting to fill the Joseph Morgan-shaped hole in the series by making Silas the big, handsome baddie, but it's not really working just yet.

And the quickest way to get a resistant crowd on board (i.e. me and people like me), is to just brain dump and explain this Silas-Stefan look-a-like contest. It's not going to make any sense and there will be some absurd connection in the very distant past that will tie it altogether, as is always the case with this show. So just do it. Rip the band-aid off. Tell us why Silas and Stefan are identical so we can move it along. Better yet, tell us why it's happening so we can get rid of it and find a new storyline.

We already did the Doppelganger dance with Elena and Katherine, and, unfortunately, Paul Wesley (Stefan, Silas) doesn't yet possess the ability to actually become a different person when he plays Silas, meaning we're doomed to be confused for as long as this charade continues.

When Nina Dobrev switches between Elena and Katherine, you know who she's playing — even when she's playing Katherine pretending to be Elena, she's skilled enough to drop hints. Hell, when Dobrev played Elena with her emotions shut down, she still found a way to make Elena her own version of hellish vampire teen instead of resorting to her Katherine tricks. Wesley simply isn't as adept at making that switch and we're left with a Silas character that just seems like Stefan on a bad day. It's not all that terrifying, especially when his only goals seem to be killing off characters that were clogging up the plot (Bonnie's dad) and hunting down Katherine, who's totally got it coming.

But where is the fear? The urgency? Yes, Stefan is suffering in his underwater coffin, but he's not going to die down there. Silas' big threat is mind control and his ability to use it on the masses, but it's not worthy of awe until he does something truly devastating or spectacular with that power. So far, Silas is just a cocky bastard and Stefan's uncomfortable on ice. When they finally do release the younger Salvatore (and it looks like that could be soon), our heroes need to get to the bottom of this Doppelganger plot ASAP and give us a reason to really care.

Until they do, the most interesting part of this show will be watching the newly-mortal Katherine learn how to deal with cold symptoms. And while Dobrev's doing an amazing job as usual, TVD is a series with a big cast. Let's hope the show finds a way to help her carry that load.