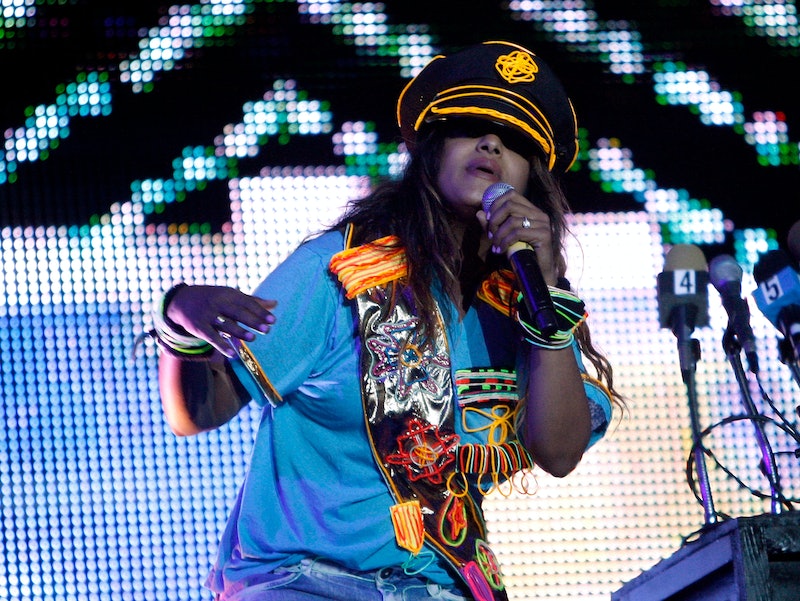 Sometimes we wonder how much creative input celebrities actually offer when it comes to their "collaborations" with famous designers. After all, you can slap the name of a famous entertainer on the simplest white t-shirt and it's bound to sell better. Thankfully, there's no question that M.I.A.'s designs for Versus Versace will be anything other than refreshingly original and branded with the singer's bouncy, gritty energy. M.I.A. pitched the design to Versace herself, and it's pretty much the hippest concept ever:

The 19-piece collection is inspired by Versace knockoffs.

Ahh! So meta! M.I.A. has always been into knockoff culture, so this collection is going to turn counterfeit designs on their heads; the collection was inspired by actual Versace knockoffs found in London markets. As M.I.A. told WWD, "Versace’s designs have always been copied, now it’s Versace that copies the copies, so those that copy must copy the copies. So this will continue."

We love seeing this kind of snarky, intelligent creative energy being poured into fashion. Forget about dumbed-down ironic t-shirts; this concept makes you think. The 405 speculates, hilariously, that in copying the copies, M.I.A. is recreating Baudrillard's concept of "hyperreality" for Versace. Baudrillard and Versace! Have you ever seen those names in the same sentence?

Here's M.I.A. in one of the upcoming collection's looks:

You can see more on the Versus Versace website.

The collection will be available in selected stores and online on October 16.