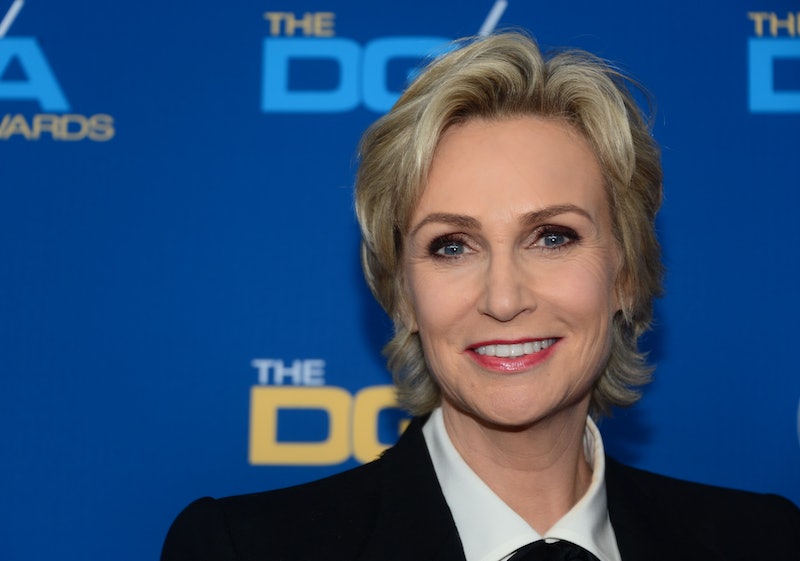 The Glee series finale is airing on March 20 — that's less than a month! — but thanks to Jane Lynch, who stars on the show as Sue Sylvester, we don't have to wait that long to get a sneak peek of what will happen. Lynch discussed Glee's final days with Nick Lachey on Big Morning Buzz, and gave some details about a beloved series that's been on the air for six seasons and almost eight years total. That's a long time, especially, as the actress points out, for some of the younger members of the cast, who essentially grew up on the show. Blows my mind, but at least the Glee cast can reach out to the Parks and Recreation cast, which just went through the exact same thing with their final episode.

Lachey showed Lynch a group photo that another one of the show's stars, Lea Michele had tweeted of the cast, and Lynch explained that it had been filmed on Feb. 19, and even revealed the song that the cast sings in the finale:

That was a big musical number, we did that on Thursday. "I Lived," I believe is the song.

In case it doesn't immediately jump to mind, I'm pretty sure Lynch is referring to the song by One Republic, which is an especially poignant choice.

I don't know about you guys, but based on that song selection, it's looking like I need to set aside that night for some serious tears. Yikes.