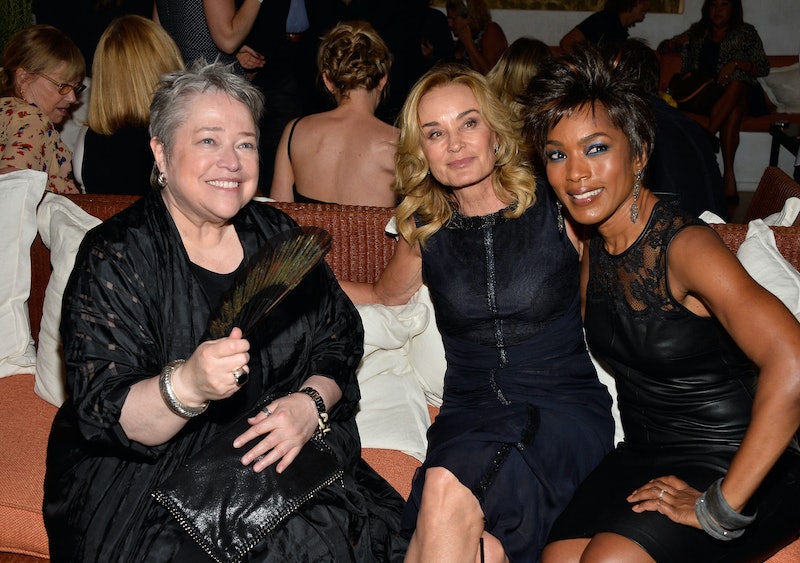 This latest piece of TV news is bizarre, totally unexpected, and completely awesome. After months of waiting for any word on Season 5 of anthology series American Horror Story, fans got huge news from a very unexpected source: Pop star Lady Gaga tweeted on Wednesday that she would star on Season 5 of the series, which is set to be titled American Horror Story: Hotel. So, yeah — my mind is officially blown. It's one of the few pieces of information that we know about the upcoming season, which, according to TVLine, is set to be a total "reinvention" of the show. But while it may change things up (a promise it made to fans when it cast the "Born This Way" singer) fans are now speculating just how this new season of AHS could connect to the previous ones. Now that we know a little bit about to expect from Season 5, what place will Hotel have in this universe?

Creator Ryan Murphy confirmed during the run of American Horror Story 's fourth season, Freak Show , that all the seasons were connected, which means that Hotel is no different. We may have to wait quite a while for more information on the upcoming series, set to air in October of 2015, but we can speculate on how this new concept will connect with the previous seasons. Here are some theories.

Hollywood will play a role

If all of the seasons of American Horror Story truly take place in the same universe, then in a modern day America, Elsa Mars is recognized as a major TV star who fell from grace. We know that Lady Gaga will be a part of the new season, and I wouldn't be surprised if they took her pop star persona and incorporated into her character. Perhaps Lady Gaga's character is a star who stays at a famous hotel in Hollywood, where Elsa Mars used to frequent. If Jessica Lange does return to the series, Elsa Mars could, too — perhaps as an apparition that represents old Hollywood glamour. If the hotel is one for the rich and famous in Los Angeles, then the characters might make reference to the "murder house" from Season 1 as another famous haunted attraction in the area.

The asylum will be repurposed.

If AHS doesn't go to Hollywood, they could return to just outside of Boston. We know that Briarcliffe from American Horror Story: Asylum was repurposed after its days as a working mental institution, but what if it gets flipped once again and becomes a luxurious hotel? It would certainly have a lot of bad juju in those walls...

The witches will take over the hotel.

As FX Networks CEO John Landgraf suggested, American Horror Story's new season will take place in modern-day America, as Murder House and Coven did before it. At the end of Coven we see present-day witches come out of hiding and make their magic known to the world. If the shows do take place in the same universe, this will be major news — and it would mean that we could see people using their magic in modern times. The hotel might even be witch-centric, and host conventions for those who are magically inclined.

The "ghost rule" will apply.

In the first season of American Horror Story, the Harmon's home was overrun with ghosts of the people who died on the property. Season 5's hotel might play by the same mystical rules — whoever dies within the walls of the hotel has their soul trapped inside forever. The new season might not share overlapping characters or places with the new season, but by using the same "rule" as American Horror Story: Murder House did, it would solidify the concept of both seasons take place in the same universe.