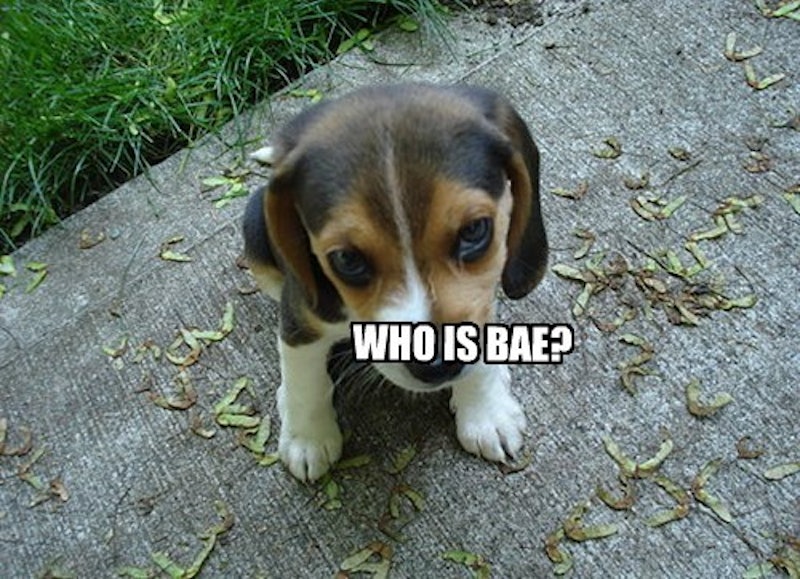 At some point in the past several years, you may have been called upon to explain what "bae" means to your mom, your uncle, your older co-worker, your trying-too-hard high school English teacher, or your mom's weird drunk friend Vicki. Perhaps you were asked to compose a tweet incorporating the word "bae" for your company's Twitter account, so that your brand could seem more edgy and youthful. Perhaps even you, a bonafide young person, have silently wondered to yourself about the actual origins of "bae,"but were too ashamed to ask. I mean, it was in the title of mildly successful Pharrell song ("Come Get It Bae") — the time for asking questions is long past, right?

That all may well be true — but if you're still not completely sure what the deal is with "bae," your secret is safe here. So let's examine the raw facts: according to Urban Dictionary and also my middle-school-aged cousins, "bae" is an acronym, standing for "before anyone else." Which makes some sense in the context that bae is most frequently used — as a substitute for "babe," "baby," or to otherwise refer to one's sugarpie honeybunch. "Bae" can also be used to refer to anything that is so outstanding, you'd pretty much date it if you could (i.e. "Julianne Moore's dye job is bae").

But let's all hold on for a sec. "Bae" is generally used as a noun, as in those "when you see bae" memes. How can an acronym that stands for a position in one's hierarchy of affection be used as a noun? Does "bae" have a different root? Is it a fascinating example of the way slang changes and develops through usage? Am I an out-of-touch old fart for even asking? All these questions, and more, are answered below.

Where Did "Bae" Come From?

According to a 2014 TIME article on the phrase, bae has been in use since 2013. According to Rap Genius, the phrase has been showing up in songs since 2005. According to apocryphal stories and some Urban Dictionary entries, the phrase stands for "before all else" or "before anyone else," though many linguistic researchers think that that's probably false; Visual Thesaurus's Neal Whitman found examples of usage of the word "bae" that appeared on the Internet six years before the first explanation of the acronym appeared. Whitman, and others, believe that "bae" was simply derived from "babe" and "baby," and that the acronym was invented after the fact.

Wait, Is That True? Then Why Would Everyone Believe That It's An Acronym?

Well, using bae as a noun makes the most sense — and its usage makes the strongest argument for the word simply being a derivative of "babe." Using it in a way that is theoretically "correct" and in keeping with the meaning of the acronym — i.e. "My lady knows that she comes bae" — sounds pretty bizarre.

The "before anyone else" explanation of bae could be what is sometimes referred to as a "backronym" — an acronym made up after the existence of a word. Of course, it could also be an example of a false acronym — a word given a fake back story as an acronym to make it seem more interesting. Lots of words have false acronym back stories, like "shit" (which some have incorrectly claimed is a shipping acronym), "posh" (which some people also incorrectly believe is based off a shipping acronym — what is it with everyone and sailors? Have you guys been listening to too many Decemberists albums?) and the f word, which one of your high school friends definitely told you stood for "fornication under consent of the king."( It doesn't).

Though if "bae" is indeed an acronym, it shares company with other commonly used words that are technically derived from acronyms, like laser.

Why Are There So Many Memes About "Bae"?

Probably because out-of-touch dorks like me keep writing about it. "Bae" is at the center of a lot of memes making fun of its own use, such as "bae caught me slippin'", "cooking for bae," and "you got a bae or nah?", all of which primarily mock the word and anyone who would use it in total seriousness. The word is also, of course, the muse for the genius Twitter account Brands Saying Bae, which retweets the most egregious examples of embarrassing corporate Twitter accounts trying to use "bae," "bruh," and other slang that was definitely not invented to describe the experience of eating at Denny's.

In the end, bae is like all other youth culture slang — a word whose use initially shows that you're in the know, and ultimately comes to symbolize that you're behind the times but trying desperately to prove that you're with it. What word has replaced bae in the hearts and minds of America's hippest youth? Check back here in a year and a half, when it is no longer cool, and I have finally learned about it.