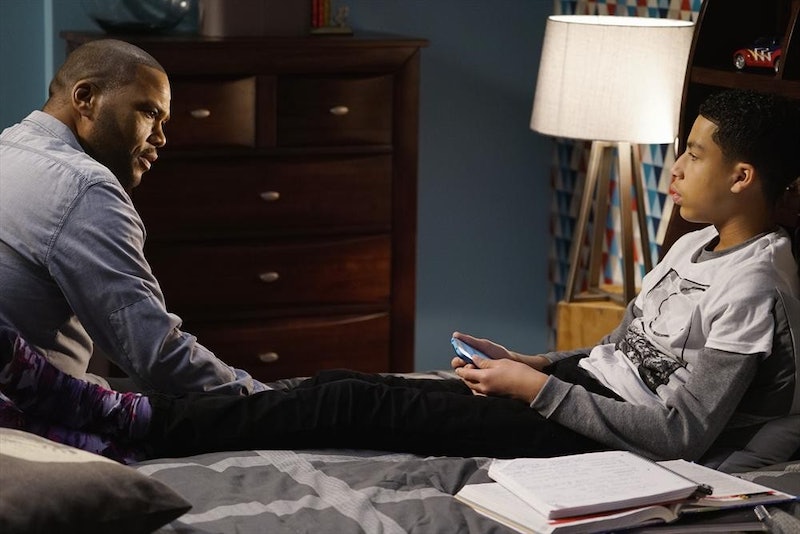 black-ish's strongest episodes take something relatable and use it as the jumping off point to a more absurd journey, usually exaggerated because of Dre's enthusiasm and the extreme circumstances that he's lived in (he went from the poorest LA neighborhood to the richest). But black-ish 's jokes are hilarious again, mostly because Unfortunately, this one was a little more like taking a standard sitcom plot and running it through its paces. All of "the dozens" jokes were at least pretty solid, though you can hear the writers living through their greatest Comedy Central fantasies, and such you lose the voice of the individual characters doing the roasting a little bit — wouldn't you expect Junior to have a more nerdy take on things (I guess you do hear that a little bit in his Stephen Hawking burn) than Dre does.

Nerdy sons are only second to dumb jock sons as far as sitcom children stereotypes go. And I'm pretty sure every single series has had a "kid learns a terrible lesson about fighting" episode. My personal favorite is still American Dad!'s, only because it both goes somewhere no other show would ever dream of, and because it has the Stelios Kontos song. Prepare to have this stuck in your head for infinity:

My heart and mind break for poor Junior every time I have to hear his voice break with disappointment at the news that yet another thing in his life is going wrong. But in order to showcase the power of jokes, we lose time with him in favor of Dre's white coworkers, who cross the line from amusingly clueless to stupidly clueless, so they become a living, breathing testament to "low hanging fruit." You know what, though, I can't get that mad at an episode that drops a Jimmy Neutron reference.

Ultimately, Junior becomes the bully when his newfound ability to point out the , Dre doesn't take things seriously until the ante is raised to the point where he sees the light and realizes that he can't let Junior burn the life out of everyone in his life. I was waiting for a final flip, like finding out that Junior just keeps being cruel to everyone because he's tired of being made fun of. But instead, he turns the spigot on himself and everything goes back to normal. I keep expecting twists that black-ish is not interested in.

The best joke of the episode is watching the student surpass the teacher as Junior delivers the K.O. punch with "when did you start parting your teeth in the middle." The show may be back to reinventing the wheel, but it's jokes are back.