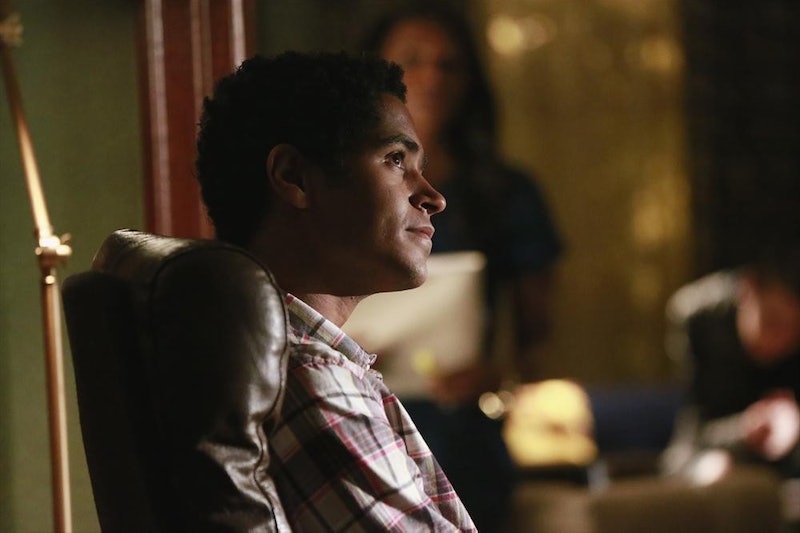 How to Get Away With Murder's Wes Gibbins (played by Alfred Enoch) has had a hell of a first semester of law school at Middleton University. The former wait-lister-turned-student of the prestigious school has gotten himself into a number of different messes — including the murder of Sam Keating, his law professor/boss Annalise Keating's husband who may or may not have killed undergrad Lila Stangard. All is supposed to be revealed in the How to Get Away With Murder 's two-hour Season 1 finale Thursday night, and that makes me wonder — will Wes be in How to Get Away With Murder Season 2?

A bunch of different alternate endings to Thursday night's finale were filmed, so even the actors have no idea if they'll make it to Season 2. “I will say three different versions were written of that. Big changes,” How to Get Away With Murder showrunner and creator Peter Nowalk told Entertainment Weekly — and he added that the identity of Lila's killer hasn't always been the same. “In fact, up until two days before our read-through, I kept changing things and was a little paralyzed with what the decision was."

I guess we'll all have to watch and find out who survives. But let's say Wes makes it through relatively unscathed — then what? Here's what I think Mr. Gibbins will be up to.

Perhaps in Season 2, the Keating Five will advance in law school and venture to another class. I know that supposedly they are taking first-year law school classes like torts, civil procedure, and contracts, but they can't take Annalise's criminal law class forever, can they?

Even Michaela Pratt stated it in one episode that it seems like the Keating Five dedicates all their time to Annalise's class.

Wes and Rebecca Hit the Rocks

It was pretty obvious from the pilot that eventually Wes and Rebecca would hook up. They've totally been there for each other throughout this season, but as television romances go, you know they're going to have to eventually fall apart at some point (Sorry, Wes/Rebecca shippers). Perhaps whatever information we find out about Lila's killer will cause a rift between these two young lovers, but hey, they'll have Season 2 to find their way back to each other.

Wes On Trial for Sam's Murder

Nah, this totally wouldn't happen. The show is called How to Get Away With Murder, not How to Get Caught and Stand Trial. Besides, the Keating Five has made it this far without getting caught and they have Annalise on their side.

Now let's see if they can see it through and really live up to the series title.