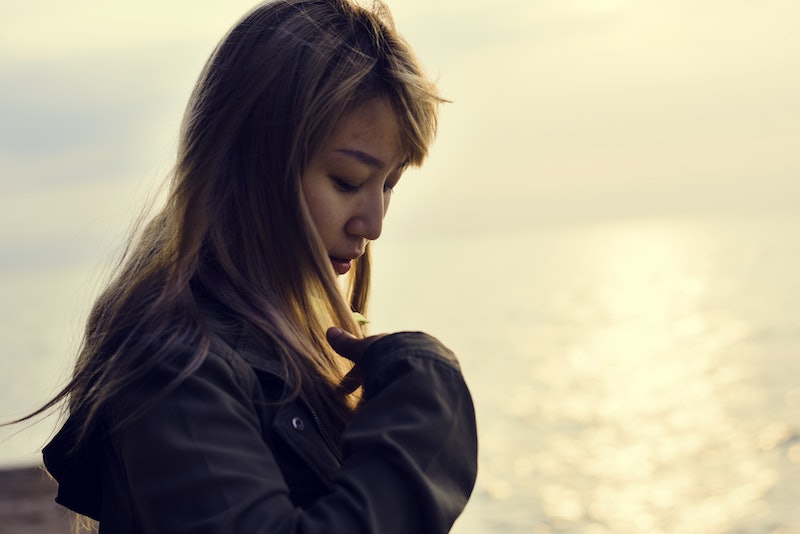 There's not a ton of information out there about nipple hair on women. And god knows I looked — because a few years ago, at the tender age of 29, my previously silky-smooth nips suddenly sprouted three black, wiry, pube-like strands of hair (two on the right and one on the left, in case you'd like to draw a technically accurate nude portrait of me). I freaked the hell out — even though several of my friends and I had spent the past few years commiserating about our chin hairs, joking that they made us witches and gave us secret powers, I didn't feel like I could talk to anyone about my three new below-the-blouse friends. What if I was the only person who had them? I felt completely alone (except for my nipple hairs, of course, who are always good company).

It turns out that, according to some experts, nipple hair on women is extremely common. But if it's so common, why do we know so little about it? And why are we so embarrassed about it? Here's what you need to know about this perfectly normal phenomenon.

Is There Something Wrong With My Body If I Have Nipple Hair?

No, nipple hair is totally normal, and not typically caused by any health problems. The only health issue associated with nipple hair is polycystic ovary syndrome, but nipple hair is never the only symptom if you have it, so there's no need to worry that a few hair sprouts mean that you have PCOS.

If I Want To Remove My Nipple Hair, What's The Best Way?

Ah, the eternal debate. Of course, there's no reason you need to remove them at all — the only reason to remove your nipple hairs should be that it makes you feel more confident — so if it doesn't, you should feel under no obligation to do anything about your wee nip tresses.

But if you do decide to remove your nipple hairs, there are a few different methods to try. And while nipple plucking devotee and nipple shaving devotees are continually at war with each other, we can all agree on one thing: DO NOT PUT NAIR ON YOUR NIPPLES! It can potentially irritate the skin of your nipples, making you pray to go back in time, when having a few stray hairs on them was your worst problem.

Shaving your nipple hairs: I already have a razor in the shower, and I found the experience of trying to hold the skin on a large breast taut enough to pluck it to be painful and frustrating, so I just shave. It takes one second to do, is not painful, and as long as you're careful about it, won't result in any ingrown nip hairs (in my own experience, of course; buyer/nip-hair-haver beware). There is certainly still a risk of ingrown hairs and even infection.

Trimming Your Nipple Hairs: I have never heard about anyone using this technique in real life, but if you can swing trimming your nipple hair with a pair of manicure scissors, go for it. Apparently, this is your least risky option.

Waxing Your Nipple Hair: Some salons offer nipple hair waxing; the process does run the risk of ingrown hairs and irritation, just like any wax. But definitely don't try to wax this at home — it's not worth explaining what went wrong to your roommates when they come home to find you clutching a bag of frozen peas to your tatas.

Laser/Electrolysis Removal for Your Nipple Hairs: You can get your nipple hair permanently removed at pretty much any place that does laser hair removal. It hurts, and it's pretty expensive, but it also eliminates it forever, so if it really bugs you/you're just really into lasers, that is always an option.

Will My Partners Be Grossed Out If I Have Nipple Hair?

No way. Like many beauty issues, this is more about what makes you personally feel confident than what your sexual partners will "expect." Anyone who's slept with a few women — or even one woman with nipple hair — will know that this nipple hair is a totally normal thing to find on a woman's body, and nothing to be rude or creeped out about.

In fact, I have noticed more than once that I had a prominent nip hair going while having sex, and no one ever brought it up to me. Odds are, anyone having sex with you is just happy to be having sex with you, and is not furiously deconstructing your various bodily quirks. And if someone is, that's obviously a sign to stop banging them, and go find someone who accepts you for you (and your nipple hairs, too).

More like this
Glossier’s New Olivia Rodrigo Campaign Is Giving ‘90s Groovy Chick
By Tomi Otekunrin
Kiehl’s Just Launched Eco-Friendly Cleansing Bars
By Jessica Morgan
How To Style Your Hair For A Festival, According To Maya Jama’s Hairstylist
By Tomi Otekunrin
Charlotte Tilbury Just Added A Glow Tonic To Her Skincare Collection
By Tomi Otekunrin
Get Even More From Bustle — Sign Up For The Newsletter