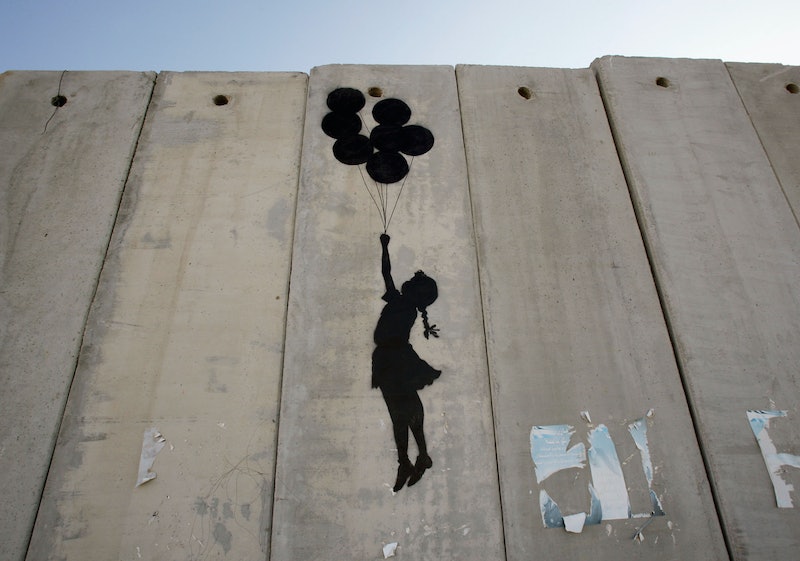 “Make this the year YOU discover a new destination,” begins a video released yesterday by British street artist Banksy. Our suggested new and exciting vacation destination? The war-torn Gaza strip. In a two-minute video, Banksy satirizes promotional travel videos, pairing typical advertising rhetoric with the harsh realities of life in Gaza. The video boasts that the region is “Well away from the tourist track (Access via a network of illegal tunnels).” The faux documentary continues, stating that “[t]he locals like it so much they never leave” before panning to a group of soldiers and adding, “(Because they’re not allowed to).” This is not the first time that Banksy, whose identity has never been confirmed, has created art related to the Israel-Palestine conflict; He made headlines in 2005 when he visited the West Bank and painted a number of images on the barrier (including the balloon stencil, pictured above).

The video shows a number of new pieces of street art, executed with Banksy’s familiar stenciled graffiti style, spray painted onto doors and ruined buildings. One image shows a figure with a headscarf bent over, hand on head. As Ben Beaumont-Thomas points out in The Guardian, the figure is reminiscent of Rodin’s iconic The Thinker, “with the figure’s hand gone from thoughtfully supporting his face to covering it in despair – or perhaps Niobe, the classical figure weeping for the loss of her children.”

Another piece displayed in the video shows a white kitten with a pink bow sprayed onto a concrete wall. The kitten appears to be playing with a ball of rusted metal. On his website, Banksy says of the piece,

A local man came up and said 'Please - what does this mean?' I explained I wanted to highlight the destruction in Gaza by posting photos on my website – but on the internet people only look at pictures of kittens.