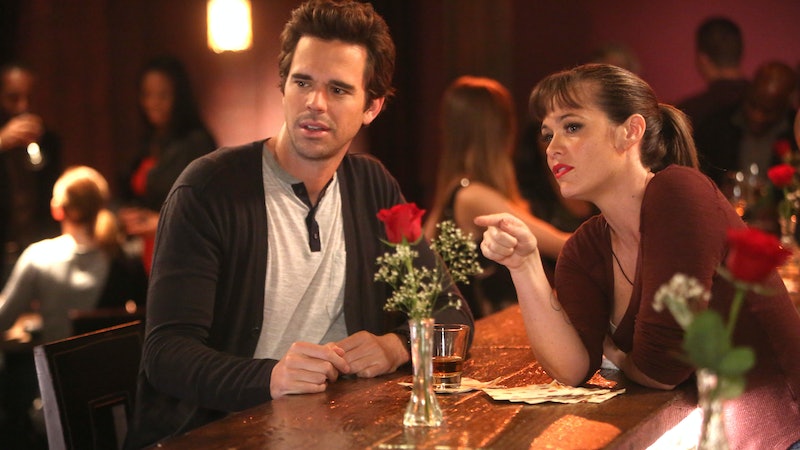 It's a question many straight women and men struggle with alike: who should pay on a first date? While it was simply a given in the olden days that the man would pay, the times they are a rightfully changin'. Although actual scientific stats on the subject are hard to come by, a survey by the dating app Coffee Meets Bagel found that 66 percent of women offer to pay on the first date, but still hope their date will pick up the tab. Twenty-two percent of women, claiming it was a man’s job to pay, claimed they would never offer, while only three percent said they would totally offer to pay the bill in full. On the other hand, 96 percent of men said they’d offer to pay the full bill.

In a world where women are striving for equality — but still average only 77 cents to every dollar a man earns — what exactly constitutes fair here?

I know I often find myself wondering if wanting a man to pay on the first date somehow diminishes my feminism. I’m not against the idea of going dutch, but I do think the man picking up the tab, especially in a world where there is still the gender pay gap, isn’t exactly a bad idea.

"When I was dating, I always offered to go dutch. I figured, we're both New Yorkers in our 20s/30s barely scraping by, why not split it? Especially when I knew guys were expected to pay in most cases, and we were both probably going on a lot of first dates.

Unfortunately, men seemed to take that as a lack of interest, when really I was trying to be considerate. Weirdly enough, almost every time the guy offered to pay for everything, I never heard back from him about a second date."

"My sense of etiquette is about 100 years old, so I'm not a good example, but I don't mind paying. That said, if she wants to split it, I'm not going to quibble. There's nothing wrong with a woman ready and willing to take care of her own business."

"Ideally, I think it should be whoever asked the other person out who should pay, regardless of gender. If I ask the dude out, I feel like I should be responsible for paying for the whole thing. I've taken dudes to concerts before and picked up both tickets, stuff like that. But, now that I'm married, it's usually like I buy the movie tickets — and he buys the popcorn."

"I still want the guy to pay. I will cook many meals in return. But yes, it's nice to be taken out in an old fashioned, romantic way. I mean, I also think the notion that the world treats the genders the same is false.

Women on average earn less than men. And, if down the road you have a child and need to take some time off work (as many women do) he might need to be the income provider in the family. Knowing that he's willing to sacrifice the cost of dinner (and it can be at Chipolte, I don't care where) makes me like the guy as someone who could step up in that situation."

"First date and he asked? I won't be jumping up to pay the bill. I asked, I'll come prepared to pay for the whole thing. But — he gets points for picking up the tab. [In a] stable, long term relationship, I [tend to] spring for special events — tickets, a hotel room. He usually picks up meals and drinks."

"When we are fighting for equal rights in almost everything, why let this alone stubbornly hang on? Paying or splitting a bill only shows that a woman is just as capable as a man. So let's kill the traditional chivalry!"

"I think that a guy should pay, at least on the first date. In my mind, this balances out an even deeper inequality than money: when I go somewhere to meet a new woman, I may be putting my time, my dignity, and even my heart on the line — but not my life. If a woman trusts me enough based on a few text messages to meet me, a virtual stranger, in this big, dangerous city, paying for her drinks is the least I can do."

"I prefer to split, at least in the beginning. Having the guy take me out feels uncomfortably old-fashioned to me. Not that I don't like a free meal, of course. If my parents' friends are in town and want to take me to dinner, or if I'm having dinner with my boss, or if the chef decides to comp something, that's totally great. But for early stage dating, I generally prefer to split the check."

"I'm a little old school: I like the guy to pay. If we hit it off and are dating for awhile then I'm much more up for splitting or switching off who's paying. However, I'm always prepared to at least cover myself, because your never know."

"In the beginning, I still think a guy should pay. After that, it's fair game."

"I don't mind either way. Because paying for someone else's dinner should be about kindness, not [gender] role obligations."

"My relationships, historically speaking, are shorter than longer — so the guy pays, always. There are times I've picked up drinks or the equivalent after maybe three or four dates, but I really do see myself as queen, or at least I do on the days when my self-esteem isn't in the sh*tter, so I see being taken care of as a guy — who, you could argue, from a DNA standpoint wants to provide — as my right. He wants to be in my realm; he can pay for dinner. Especially if he's the one planning it or asking me out."

"I hate to say it, but if a guy pays on the first date he scores major points with me. If he doesn’t, then I’m not sure I’d go on a second date. I may be a feminist who can well afford her own meals, but I also like the idea of chivalry and being taken care of."

"If I ask, they better be okay with me paying. And that's paying entirely. It's about treating people the same, no matter what their gender is."

"The man should always pay for the first date. Dudes feel entitled to free stuff all the time, the least they can do is feed you for the trouble you take to tolerate their company. Later on, if they prove themselves to be decent human beings, I have zero issue splitting costs or paying for dates, but they should always pay the first time."

"I prefer to split. [It] makes me uncomfortable having a guy pay for me unless I know he can more than afford it. If he offers to treat, then I usually offer to treat next one."

"I don't feel bad about letting someone else pay in certain circumstances, like if they are making dramatically more money than I am. But in general, I like to split it or take turns. I say this now since I'm working again, but when I was unemployed and had little money for going out, those rules went out the window. Pretty much if anyone in any situation offered to pay, I was super grateful and accepting. I don't have that much pride."