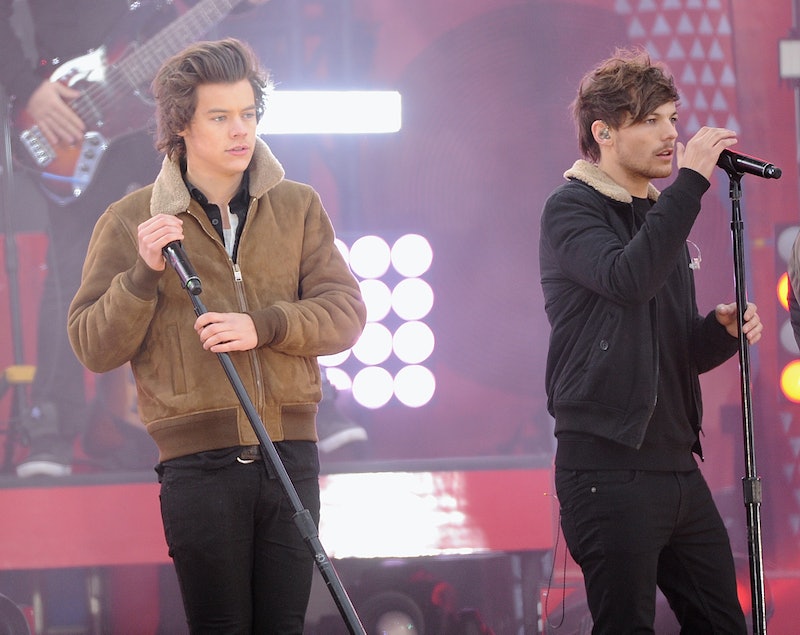 If you're a One Direction fan like me, you are probably already well aware that the guys in the band have the cutest friendships — especially Harry Styles and Louis Tomlinson. As adorable as Harry and Niall Horan might be, Harry and Louis as BFFs takes the cake. That doesn't mean that I'm part of the group of 1D fans who think that Harry and Louis have a secret romance going on behind the scenes; although if they did I wouldn't be upset about it. I think what we have here is a beautiful, beautiful bromance, and I love every second of it.

Since the band first formed in 2010, they've treated us to five years of fun music, good looking shirtless British men, and the cutest relationships between band members that have ever occurred on this earth. Between multiple world tours and hundreds of interviews, Harry and Louis have treated us to some of the most squeal-worthy moments ever — moments so ridiculously adorable that you just want to pinch their cheeks and tattoo their faces on you arm. No? Just me?

These are some of my favorite shared moments between Harry and Louis. We should all be so lucky as to find a friendship like this in our lives, but if we don't, at least we can live vicariously through theirs. Sigh.

When they cooked together

If they wanted to host their own cooking show, I would seriously watch.

When they were adorable during an interview

This dance they did while they were on James Corden's show

Try to tell me this isn't the cutest thing you've ever seen.

To be fair, this may not be a best friend thing — it may just be a Harry thing. He has the kind of hair you just want to touch.

All of their hugging moments

There have been so many. What's not to love about two good looking guys sharing an embrace? Answer: nothing.

And with well over one million retweets, I am certainly not the only person who found this precious — even if it was tweeted in 2011.

Linking arms during an interview

For all the guys who are afraid to show affection to their male bros, let this be a lesson to you. If Louis and Harry can do it, so can you.