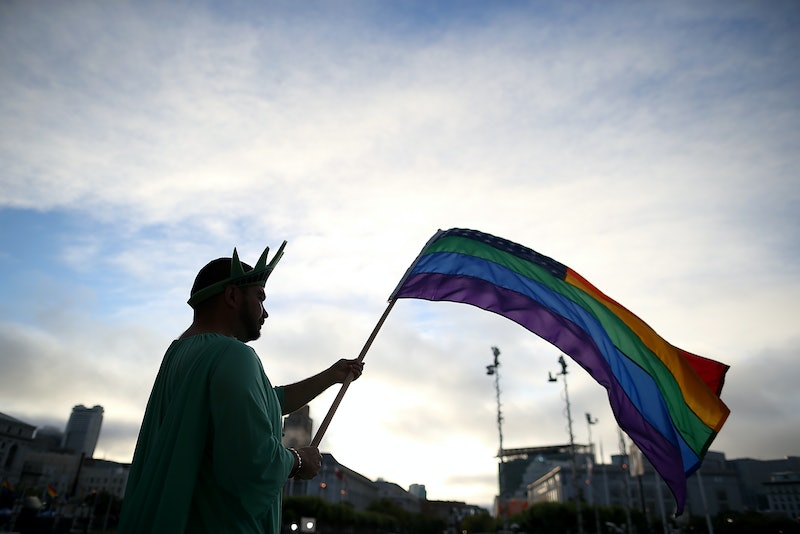 Two weeks ago, New Jersey judge Mary Jacobson ruled that her state must begin allowing gay couples to legally marry from Oct. 22 this year. State Governor Chris Christie opposed the ruling, which would make New Jersey the 14th state in America to lawfully accept gay marriage, and appealed Jacobson's decision, requesting a delay of the Oct. 22 deadline in the meantime. On Thursday afternoon, state judge Jacobson rejected Christie's request to delay her self-imposed start date, meaning that if Christie's camp doesn't successfully appeal her decision within two weeks, same-sex couples will be legally allowed to obtain marriage licenses in the state of New Jersey.

Christie is reportedly considering running for Republican presidential nominee for 2016, and though he's made some progressive decision for the state recently, including banning gay conversion therapy, he's opposed to Jacobson's judgment. It's likely that he'll take his appeal to a higher court, most likely the New Jersey Supreme Court, before the Oct. 22 deadline — and even if same-sex marriage is then legalized, Christie may press the higher courts to void the legalization a little while later. At present, New Jersey offers its citizens same-sex unions, but not marriage.

In Jacobson's original ruling, she cited the Supreme Court decision to overturn DOMA in June, as well as New Jersey's equal protection laws; making the case that same-sex marriage must be made legal in the state by Oct. 21 this year. In the ruling, which you can read in full here, she wrote: "Same-sex couples must be allowed to marry in order to obtain equal protection of the law under the New Jersey Constitution."

Her second ruling Thursday stated that allowing gay marriage to progress in the state would not "harm" anyone, as per Christie's appeal, and speculated that an appeal wouldn't work. "The 'harm' (the state) alleges simply cannot justify depriving plaintiffs and other same-sex couples of equality in the form of access to important federal marital benefits," she wrote.

A state poll also found Thursday that most of the state's New Jersey's residents are in favor of Christie dropping the appeal.