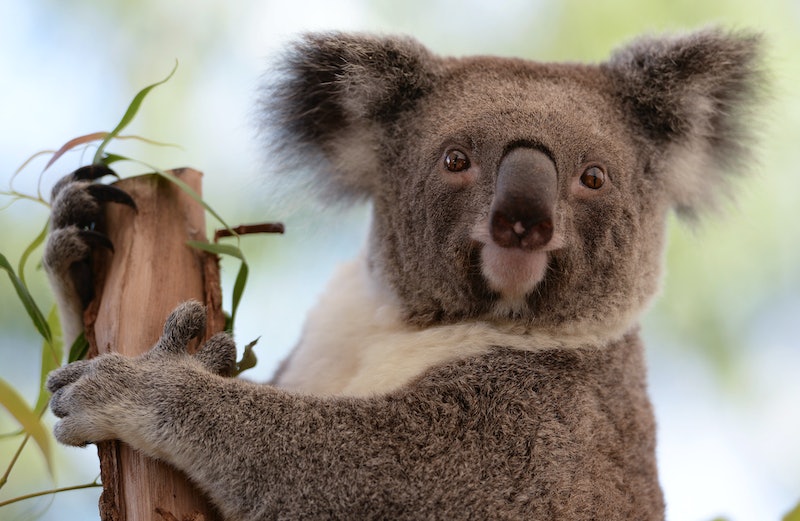 Diane Pernet is a fashion eccentric in the truest sense of the word. Even if you don't know the woman behind A Shaded View on Fashion Film from her work, you've most likely seen her on blogs or in photos sporting her signature look consisting of a floor length gown, cat-eye shades, and a mantilla placed over her impossibly high, black beehive. Pernet is an avant garde staple of the fashion community; so when it came to making her first set of fragrances, she of course had to make something as offbeat and outlandish as she is including, yes, a koala-inspired scent.

According to Women's Wear Daily, Pernet took over the beauty windows of department store Liberty London to debut four films she made in collaboration with director Mike Figgis in celebration of the launch of her four new fragrances. Each film is meant to embody the essence of one of the fragrances, created with Celso Fadelli of Intertrade Group, and seems to be a natural extension of the scent. After all, "Fashion, film, and fragrance are the loves of my life," Pernet told WWD. One love she left out, however, is her deep, abiding passion for koalas.

So, naturally, when it came time for Pernet to pick her perfume's top notes, her love for the marsupial had to be encapsulated into one. Though the fragrance didn't make it into this round of releases, Pernet promises that a eucalyptus based scent it is in the works, all of the proceeds from which will go towards the charity Save The Koala.

While this fragrance from the doyenne of fashion may sound unconventional, she's not the first to throw some strange ingredients into the olfactory mix. Here's five perfumes that give a whole new meaning to the word weird.

The Soft Lawn by Imaginary Authors

The Soft Lawn from Imaginary Authors is inspired by author Claude LeCoq's first novel by the same name published in 1916. The book follows a privileged, upperclass, young tennis champ in the midst of spitting out the silver spoon life's handed him. The perfume attempts to embody this WASP-y, elitist atmosphere by utilizing notes of fresh tennis ball and clay court. I suggest pairing this fragrance with a seersucker suit and a freshly cut lawn for maximum impact.

Comme des Garçons has mastered strange, yet surprisingly charming, scents. It's become a signature of the brand's fragrance line to include super unusual notes, which can include anything from pollution to asphalt and plastic. But Comme des Garçons 2011 Eau de Parfume just might be the best, featuring guilty pleasure smells of packing tape and industrial glue. (Admit it, there's a reason you love opening boxes!) These man-made odors are buried beneath overwhelmingly floral notes of lilac and hawthorn meant to imitate the designer's imagined scent of an industrialized, constructed flower.

Shiseido's Zen fragrance is out of this world. Literally. This perfume actually uses rose petals from space as part of its make-up. In 1998, NASA let the International Flavors & Fragrances corporation put a rose on the space shuttle Discovery as part of an experiment to see if zero gravity would affect the flower's essential oils and, thus, it's scent. Whatever happened to the rose up there, its odor was mixed into Shiseido's Zen fragrance, described by the brand as "floral, woody, and spiritual." Sounds like a Buddhist retreat in a space age bottle to me.

For the girl who's favorite holiday is the Fourth of July and dreams of nothing but tenderloins and spice rubs, I've found your new favorite fragrance. Though the perfume sounds like something out of an SNL parody, this smoked meat aroma is no laughing matter. The scent is a collaboration between Pork Barrel BBQ and master perfumers who wanted to fill the BBQ-shaped hole in the fragrance market with a smell their website calls, "an intoxicating bouquet of spices, smoke, meat, and sweet summer sweat." Just don't be surprised when you start attracting a horde of slobbering followers.