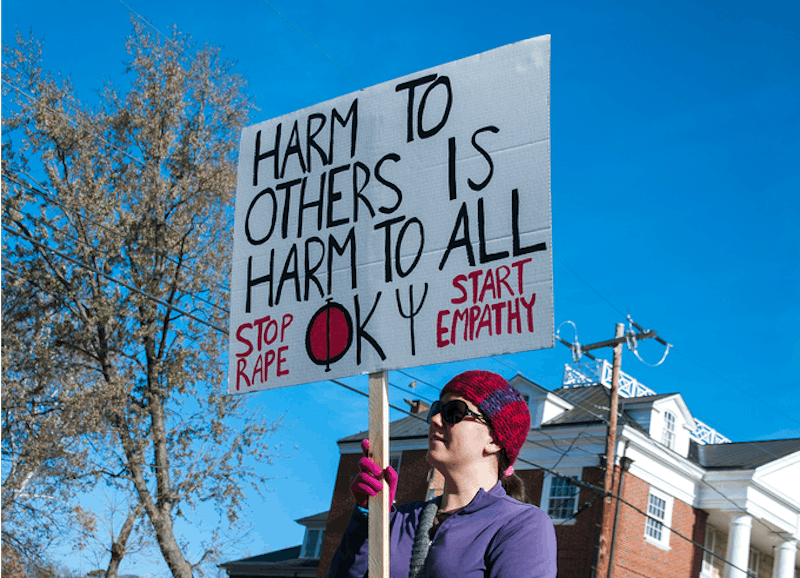 When it comes to preventing rape, self-defense training sounds like a good idea in theory... but maybe only in theory. One of the largest anti-rape, self-defense programs is the police-taught college campus program known as Rape Aggression Defense, or R.A.D., and as Jezebel uncovered when they looked at the R.A.D. handbook, the program's approach is actually pretty messed up. In fact, I'm kind of confused why it's still being taught on campuses across the country.

When I was in college, I attended a sort of info session for R.A.D., a free, hour-long class in which a very polite, friendly police officer explained the importance of self-defense, gave us some basic instructions for situational awareness, showed us a few self-defense moves, and answered some questions. The point was mostly, I think, to show us how useful it would be to take the full weekend-long course, but I remember walking away feeling not just uninterested, but also uncomfortable.

In just an hour, the officer had listed so many behaviors to avoid — things I did all the time — that it seemed like there must be a danger of being grabbed and assaulted around me constantly. Plus he plainly thought that anyone who walked home alone after dark — even though in Chicago, darkness can fall before 5 PM in the winter — was an idiot. I didn't really know how to articulate it at the time, but the overall impression I got was that living your life as though you had a reasonable expectation not to be assaulted was unacceptably reckless.

Needless to say, I didn't sign up for the course.

But it turns out that what's in the R.A.D. handbook is even more disturbing than listening to a well-meaning cop lecture you for an hour about how you basically should make yourself wholly dependent on other people any time you want to go anywhere. As Susan Schorn says, "Universities across the country have been eating this program up since 1989, and no wonder: R.A.D. is a perfect slice of patriarchal fear-cake, studded with nuggets of bad advice and thickly frosted with condescension."

The handbook is specifically designed to deal with "various types of abductive encounters perpetrated against women," despite the fact that being taken by a stranger in a public place accounts for a small minority of all sexual assaults. Women are more likely to be raped in our own homes than on the streets, and attackers are vastly more likely to be friends, family, or acquaintances than to be strangers. "In other words," Schorn writes, "the nation's highest-profile self-defense program for women states up front that it's ineffective in 60 to 80 percent of assault situations."

The course also teaches "risk reduction strategies" that get so deeply into minutia they could easily take over your whole life. Have heavy drapes so peeping-toms can't see in. Always stand next to the control panel in an elevator. Don't drink. Don't put your name in your license plate. Go to a gender-specific gym. Keep your bushes trimmed. Get your local police to come "survey" your house for possible entry points. The list goes on. And on and on. The manual is 66 pages long.

Remember that the next time anyone ever accuses women of being "paranoid" or says it's "all in our head." Apparently paranoid is what we're supposed to be, seeing monsters everywhere, just to be on the safe side.

The sad thing is that there is a real need for rape prevention training on college campuses, as the recent national conversation around college sexual assault has thrown into sharp focus. Young women on college campuses face an unacceptably high risk of being assaulted, but teaching them to trim their bushes and giving us lectures about not drinking and generally teaching us that it's our job to spend our whole lives paranoid and afraid is not only a cruel solution, it's also not an effective one. And the fact that money is going towards this programs as opposed to other, much better ones, is a shame.

If cops really want to get involved in preventing sexual assault there are things they can do. I, in general, am skeptical of the criminal justice system's ability to affect change in this area given how spectacularly they continue to fail victims at nearly every stage of the process; however, if individual law enforcement officers want to make a difference, I'm not opposed. But the idea that teaching women how to be even more paranoid than we have already been taught is just bogus. Newsflash: We have been getting a watered down version of R.A.D.'s lectures our entire life. They aren't preventing anything.

Rather than lecturing women, police officers could try teaching people not to rape or assault in the first place. Use your badge and your uniform to impress upon young men that this is a serious matter. That "No means no" is not just a slogan, it's the law. That taking advantage of the drunk girl is not just youthful tomfoolery, it's illegal. That what someone is wearing is irrelevant to whether or not he or she is a person. That disrespecting women does not make you a man. That hurting women does not make you a man. Dispel the notion that rape is mostly about strangers jumping out of the bushes. Explain that most rapes happen in situations they are familiar with. Tell them to speak up when they see something wrong and speak out when their friends say something unacceptable. Teach young people not to rape, and to take rape seriously.

And while these hypothetical cops are at it, they could also make their own efforts to speak up in their own department and to take rape cases seriously, even when the victim's story doesn't match up with the scenarios envisioned in R.A.D.

That might make a difference. Telling me not to drink won't. Expecting women to place limits on our lives has never stopped rape, not in any culture or any time period. But teaching everyone that respect is non-negotiable? That might do the trick.

You can find a full copy of the R.A.D. handbook at Jezebel here.