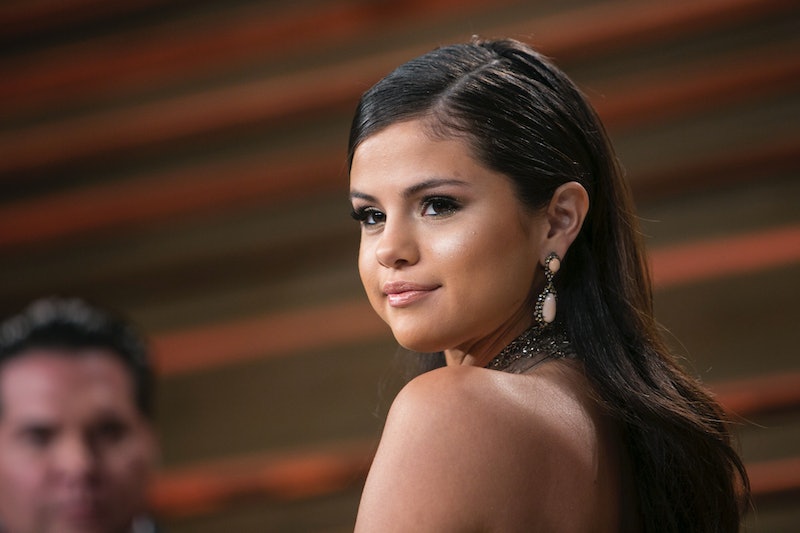 Sounds like Selena Gomez is taking a page out of her BFF Taylor Swift's book! Swift is known for developing a close relationship with her fans and helping them when they're in need, and now, Gomez is doing her best to give her fans the same. When she found out one of her fans seemed to be suicidal late Wednesday night, Gomez quickly reached out to her fan to offer advice and comfort via Instagram. Gomez then took a screenshot of the comment and posted it to her own account so that the rest of her followers could benefit from her advice if they needed to. If you weren't already sold on Selena Gomez as a person, this ought to do it for you, because her message was very sweet and to the point.

"People every day feel so many emotions they wish they could turn off," Gomez wrote. "But that's not why we are here. We are here for relationships, for people just like us who feel worthless. Your purpose is to share, help, and encourage."

And this is far from the first time Gomez has tried to offer her words of wisdom to fans who needed a little extra encouragement. Over the past few years, Gomez has reached out whenever she could, and it's impossible to ignore how many people she's managed to help just by being there for them, even through something like social media.

When she helped a fan with a bad relationship

It's true: sometimes, bad things happen and we will eventually laugh about them. Other times, they suck so much that the laughing part never happens. But that's OK. Live and learn — and take Gomez's advice. It's solid.

When she regularly comments on as many profiles as possible

There are certain times where dozens of Gomez fans end up with a surprise comment from their favorite celeb — and she's sure to post all the evidence on her own Instagram in masse. It's clear that Gomez really enjoys connecting with her fans, even when she's just offering a few words and well placed emojis.

When she stood up for a fan who was being bullied

One of her fans was going through a really rough time, and Gomez caught another one bullying her. Obviously, she stepped in, because she's basically a superhero.

When she offered advice on being comfortable in your own skin

Because if someone as gorgeous and wonderful as Selena Gomez has a hard time accepting herself once in awhile, I think we should all try to be a little bit easier on ourselves, right?