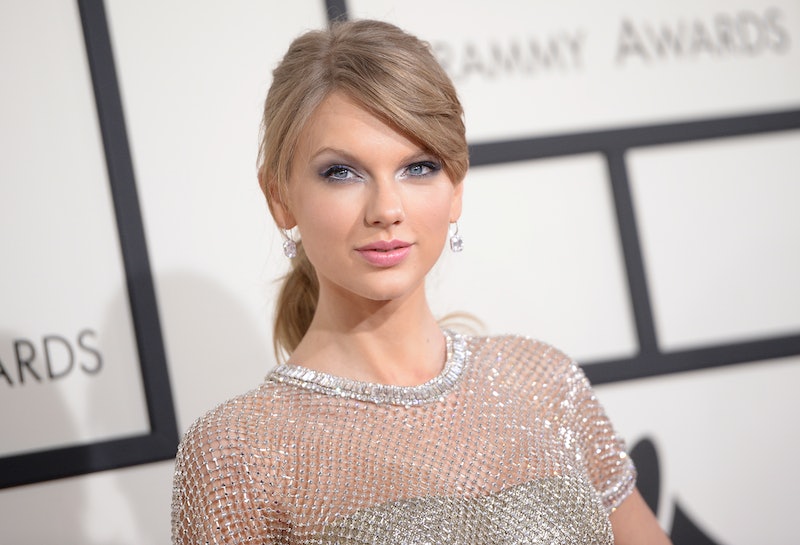 There's a reason why I would want to be pals with Taylor Swift, and for once it's not because she has a history of sending her friends homemade chocolate chip cookies. Nope, the "Blank Space" singer is endearing herself to me with more than just sugary treats: Swift recently gave a fan breakup advice via Tumblr, and it's like receiving a warm hug from your most together friend. According to Buzzfeed, Swift's fan asked the star what to do about her ex-boyfriend who broke up with her suddenly and now won't stop calling her names. Much to the surprise of the fan, Swift responded, and gave the fan some pretty important advice — block this idiot from your phone, stat, because while she "fell in love, no games" she had every right to "say goodbye, no games." Even better? She gave her fan a breakup playlist, because everyone needs some serious music therapy post a bad split.

People looooove to roll their eyes at Swift writing about her love life in music — she is, after all, the only musician in the world to do this — but her advice to this fan proved that she's pretty wise when it comes to matters of the heart. The singer may have had her share of heartbreak, but she seems to have come through stronger and more mature because of it. Of course, you don't need to be one of Swift's many BFFs or even a Tumblr user to get some great heartbreak advice from Ms. Swift — just listen to her albums. Here are some of the best lyrics for getting over a breakup, straight from Swift.

"People like you always want back the love they pushed aside, but people like me are gone forever, when you say goodbye" — "All You Had To Do Was Stay," 1989

So, that emotionally unavailable jerk wants you back? You know what, you're pretty good on your own.

Whether it's a romantic breakup or one with a friend (like, say, Katy Perry) if someone treats you badly without much evidence that they'll change, it's time to cut them loose.

"I'm really gonna miss you picking fights and me, falling for it screaming that I'm right." — "We Are Never Ever Getting Back Together," Red

Obviously, you're SO not going to miss this.

"And you call me up again just to break me like a promise, so casually cruel in the name of being honest." — "All Too Well," Red

You're going to want to talk to your ex after a breakup. In one line, Swift reminds you why it's okay — and often better — to just not.

"And you’ll add my name to your long list of traitors who don’t understand, and I’ll look back and regret how I ignored when they said run as fast as you can" — "Dear John," Sparks Fly

When your ex calls you crazy behind your back, remember these lyrics. He probably sucked anyway.

"I realize you love yourself more than you could ever love me." — "Picture to Burn," Taylor Swift

Did he or she spend more time checking themselves out in the mirror than they did staring into your eyes? If so... this.

"I've been spending the last eight months thinking all love ever does is break and burn and end, but on a Wednesday in a cafe I watched it begin again." — "Begin Again," Red

Just because you dated a loser (or five) who didn't appreciate your special brand of awesomeness doesn't mean that you don't deserve — or won't eventually find — someone equally as lovely as you are.

On the cusp of being finally #overit? This song's sick beat may just push you over the edge.