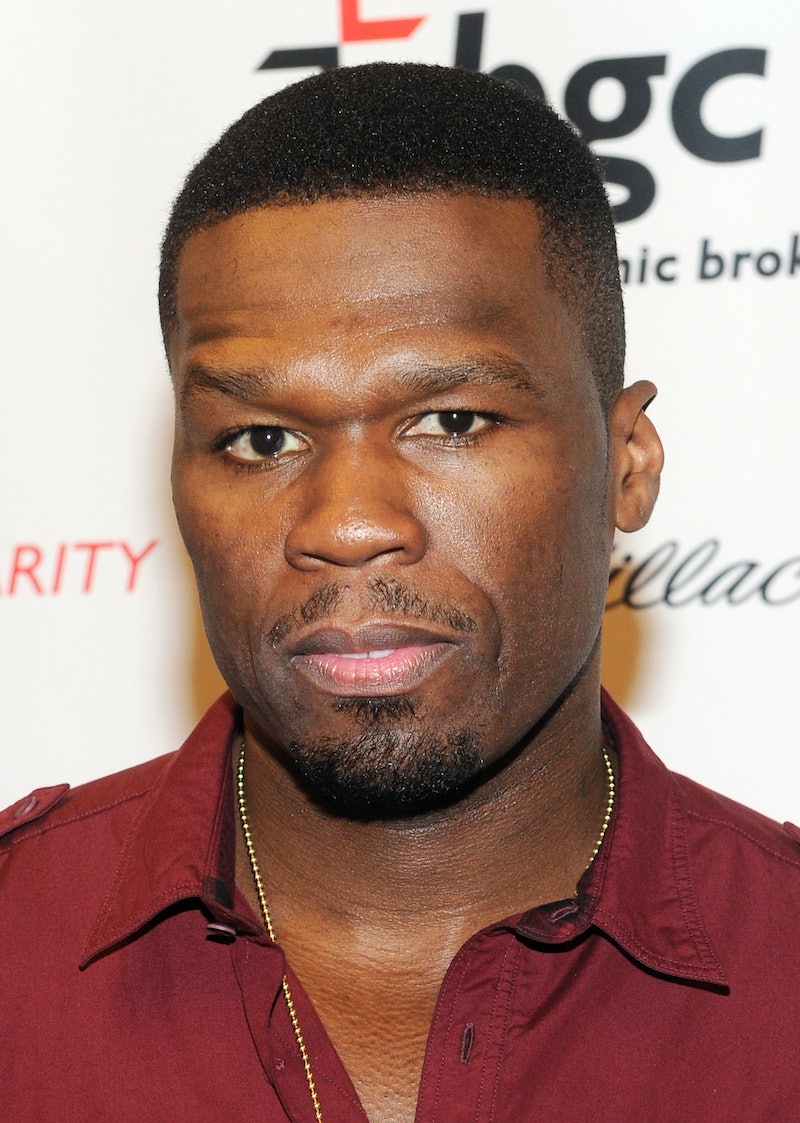 Have you seen 50 Cent's Instagram? It is a thing of both beauty and terror. Instead of posting jealousy-inspiring pictures, like most Instagram users do, 50 Cent uses his Instagram as a place to rant. And instead of even taking actually pictures, he takes stock photos and comics and writes his thoughts over them. Now the whole world can know that 50 Cent has the sense of humor of a 13-year-old, nonsensically uses the hashtag #smsaudio (his line of headphones), and oh yeah, he doesn't think women are real people. Take a look through 50 Cent's Instagram feed and learn how not to talk about women on Instagram:

Before today, I had no idea what a THOT even was — those were happier times. According to Urban Dictionary, "A name used to describe a females who frequently hook up and has sex with multiple guys (sometimes in the same night) without being in a relationship with them. Originally standing for 'that hore out there.'"

Not only is this yet another insult that degrades women's sexuality when we already have so many, but the very definition of the word means that you don't even have enough nerve to directly speak to the woman in question. And according to 50 Cent, THOTs are everywhere:

Women Only Exist to Do Sex For Menz

You didn't know? Women aren't complex human beings with emotions. They're there for sexy times, duh! At least I know better now, thanks to 50 Cent. I have also seen enough cartoon boners to last me a lifetime.

...But They Want a Lot of Money For It

50 Cent knows how crazy ladies are, always wanting material things. I mean, that's all women really care about, right? And as a millionare, 50 Cent really knows how much this hurts.

If women have too much sex, they're THOTs. But according to 50 Cent, if they don't have enough sex, spiders inhabit their vaginas and they get all dusty and gross.

So what's the moral of the story? Yeah, you could be mildly annoying and post pictures of your food on Instagram...or you could follow these guidelines and compete with 50 Cent for the Worst Instagram Ever. The choice is yours.

More like this
Long Live Bennifer!
By Allie Jones
Why The '365 Days' Sex Scenes Are Good, Even If The Movies Aren’t
By Arya Roshanian
Twitter Can’t Get Enough Of The WAGatha Christie Trial
By Nola Ojomu
Sandra Bullock, Girlboss Extraordinaire
By Matt Harkins & Viviana Olen
Get Even More From Bustle — Sign Up For The Newsletter