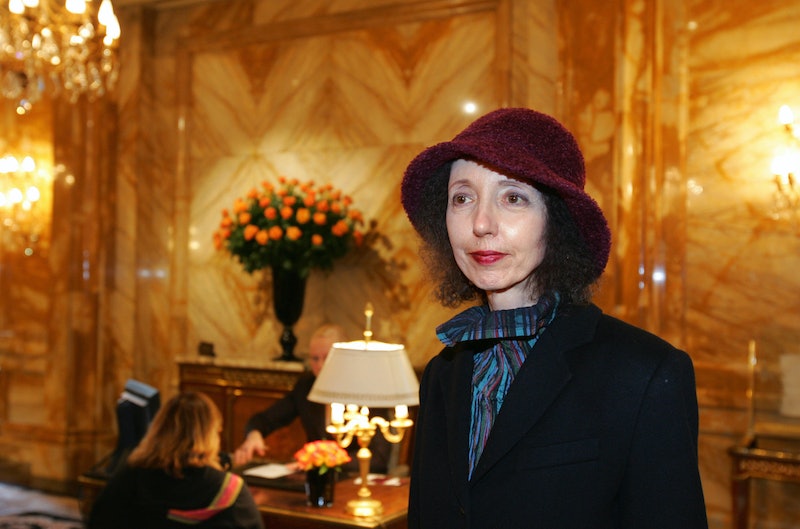 Joyce Carol Oates doesn’t shy away from darkness. If you’ve read her best-known story, "Where Are You Going, Where Have You Been?," based on the account of a Tucson serial killer, you’ll know what I mean when I say that Oates’ particular brand of subtle ferocity lingers long after the story’s over. Her portrayals are so lovely, her prose so seemingly effortless, that her work’s murky, disturbing depths often creep in unnoticed.

I saw Joyce Carol Oates give a reading at Tattered Cover Bookstore in February. Watching her read from her latest novel, The Sacrifice, only reinforced my infatuation with her calm, brave, and precise defiance of the status quo. The scene she read describes the injuries of a 14-year-old girl left for dead in the woods, the victim of sexual and racial violence. Oates remained calm, collected, never raising her voice in anger or surprise for the narrator — showing the violence in the world she has created without succumbing to the horror of it. (It’s worth noting that the book is based on a real crime that occurred in 1987.)

Since revisiting Oates, I’ve come to value the power of her work to enlighten social injustice. In her story “Lovely, Dark, Deep” (also the title of her latest short-story collection), for example, the editor of a small poetry review, a “pretty young woman” named Evangeline Fife, visits a fictional Robert Frost’s home for an exclusive interview. As the interview goes on, Fife exposes Frost’s ubiquitous bigotry, and the story ends with him flattened by Fife’s unforgiving analysis of his work and life. Through this portrayal, Oates shows us the importance of never backing down, and of the power of words to demand justice and tolerance.

Oates is a formidable voice for modern women, using story as a way to empower those overlooked by society. Read her work, and you’ll remember just how much raw force is latent within each of us.

You’ll Realize Just How Much You’re Capable Of

Let’s not get into the details of Oates’ extensive bibliography. Let’s just say that once she committed to full-time writing, she never wavered in her conviction. Reading her work will remind you how much you can accomplish in one lifetime if you have even half the discipline of Joyce Carol Oates.

Any Preconceived Notions of Young, Petite Women Will Be Shattered

Oates often writes of young women whose sharp wits help elevate them above ubiquitous sexism. These women prove that the gender-related dismissals they receive are ill informed and undeserved. Don’t. Mess. With. These. Women. (You can never predict what characters of any age, gender, race, or background in Oates’ stories and novels are capable of doing.)

Details About the Characters All Around You Will Suddenly Appear

Who can forget the first time Arnold Friend wobbles up to Connie’s front porch in those modified combat boots? Can you still see Connie’s blond hair shimmer-drying in the sun? Joyce Carol Oates is a master of detail, you’ll see, once you dive into any her works. For a great example, see “I.D.”

Let’s face it, teen girls can be shallow, but Joyce Carol Oates’ depictions of them never are. With so many people trying to influence their decisions and identities, it’s a wonder any of us ever made it this far.

Other People’s Opinions Will Cease to Matter

Joyce Carol Oates doesn’t care what you think (and why should she?). Here’s an excerpt from an interview with the Paris Review: “I've never been able to respond very fully to criticism, frankly, because I've usually been absorbed in another work by the time the criticism is available to me. Also, critics sometimes appear to be addressing themselves to works other than those I remember writing.”

While extroverts are out there hogging all the attention, self-professed introverts like Joyce Carol Oates are observing, processing, and discovering how to transcend the artificial borders of private experience.

Your Vocabulary Will Increase Drastically

The vertiginous instructor cowed her students by diffracting their inchoate musings. Ha! Joyce Carol Oates would never write a sentence that terrible, but you can once you’ve filled your vocab sack with words stolen from her vast intellect.

The Limitless Bounty of Story Will Open Its Doors to You

Didn’t think you could write about someone as well known as Robert Frost? Or Marilyn Monroe? Or the Tawana Barley case from 1987? Pshaw! Joyce Carol Oates knows that stories are within us and all around us — no subject is closed to our imaginations.

People love Oates’ books and stories. People hate them. People find her “experiments” too risky, too macabre, too crazy, or not crazy enough. Does Joyce Carol Oates succumb to the questionable motives of her reviewers and critics? Not for a second. “As my novels grow in complexity they please me more and please the ‘literary world’ hardly at all — a sad situation, but not a paralyzing one,” she says.