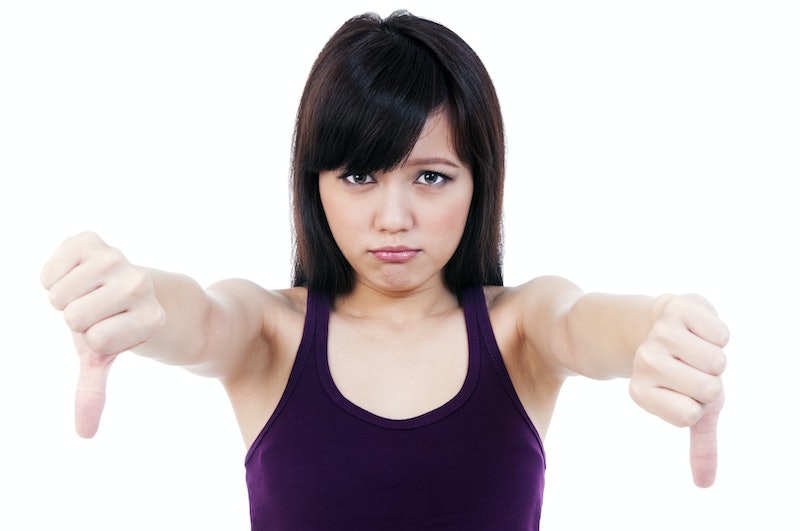 Having any kind of talk about sex with your parents can be awkward, to say the least. But still, at least be grateful that none of your conversations were as awkward as this vintage sex talk by a Christian dad that's been recently unearthed. At least, we hope not. If they were, we're sorry.

In the video, entitled "7 Simple Rules For Dating My Christian Daughter," we see a Christian dad laying down the law — though actually his rules seem to be more for his teenage daughter and for teenagers everywhere, rather than aimed at any boys who might want to date her. And it would definitely be boys, since naturally LGBT pairings don't even figure into this guy's dating ideas. Obviously not all Christian dads are like this; but this one? He's really something else.

The whole thing is just painfully awkward, even so more than any of the 1950s sex and dating videos I've seen — which is really saying something. I mean, the amount of verbal acrobatics he has to go through before he can bring himself to utter the phrase "turned on" would be hilarious if his uncomfortable smile weren't also so painful and creepy. I feel officially sorry for everyone who was ever made to watch it. Plus, on top of everything else it gives terrible advice.

Just to prepare you all, here are eight of the most cringe-worthy moments from it; watch the whole video below.

The daughter, whose name is Danielle, sits in her pastel bedroom asking her father in a cutesy version of teenage "real talk" to tell her the right way to date. I think it's supposed to come off as endearing yet realistic... but let's face it: No child has ever uttered this sentence in the history of the unscripted world. Someone save this girl. Please. Save her now.

I do not know what a "date mate" is and I am not sure I want to. Why do they keep using this phrase?

4. Turning People on Is "Fraud"

Apparently if your date finds you sexually attractive, this is a form of "fraud" because you don't have any means of "righteously" fulfilling his or her (though let's be honest, they're talking about his) desire. This is one of the creepiest things I think I have ever heard of in my life. Since when is finding someone attractive a bad thing that people have to apologize for? This is basically telling kids that sexuality is inherently bad and that you shouldn't encourage anyone to have sexual feelings — including yourself — ever.

Still on the subject of turning people on, the moment he utters the phrase "using her anatomy" (with that creepy smile no less) I think my brain shut down in self-defense for a minute. What even is this video?

6. "This is Something That You Must Decide"

Apparently whether or not you "save yourself" until marriage is a decision you have to make — but according to this video, you are absolutely required to make the one where you "save yourself" until marriage. Let's just take this moment to remind ourselves that a choice isn't a choice unless you make it yourself — and that no one is allowed to make your choices for you if you don't want them to.

7. Submission to Your Parents

He basically says that if you don't do exactly what your parents say, you are doomed to a life of misery. It's creepy as hell.

Okay, in all seriousness, this time, he's just spouted a whole bunch of creeper stuff that shows minimal understanding of choice and healthy sexuality... and now he's talking about how he thinks she's ready to date, creeper smile fully in place and his hand on her knee. What once was funny is not anymore. Save. This. Child.

On the one hand, the video is a kind of so-terrible-it's-hilarious example of overly conservative sexual ethics. On the other hand it is completely disturbing to think that there are people who really believe in all of this stuff and how messed up it is.

I'll let you guys make up your own minds. Watch the full video below: